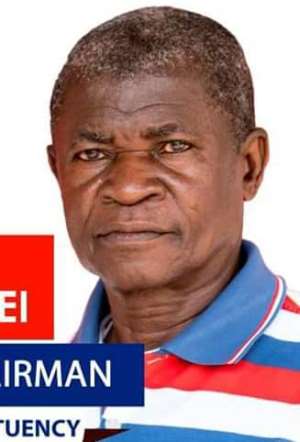 The NPP Constituency Chairman for Asante Akyem North, Mr. Sampson Agyei, has run to the District Police Commander in Agogo for cover from the curses invoked on him, the MP and other constituency executives by a Polling Station Chairman, Kassim Awudu for suspending him.

Kassim went to River Bomfum popularly known as Inspector to invoke curses on the party executives for using him for all the dirty works during the 2016 general elections and after failing to secure him a job as promised by the Member of Parliament, Hon. Andy Appiah-Kubi, suspending him for meeting his colleague polling station executives to campaign against the MP.

The Constituency Chairman, Mr. Sampson Agyei was heard on Adom FM contradicting himself saying Kassim is not an executive member of the Party but later accepted Kassim worked assiduously for the party in the 2016 elections and was made a polling station executive but denied knowledge of his suspension. Mr. Sampson Agyei further stated the curses will not hold because it doesn't have grounds.

Our sources have discovered after the Chairman came to radio to brag, he nicodemusly went to the District Police Commander in Agogo to lodge a complaint against Kassim Awudu over the same curses he downplayed. He is seeking for the police to search for Kassim and force him to go to the same river-god to overturn the curses.

One will wonder why the Chairman after denying the concerns of Kassim Awudu and downplaying the curses will later run to the Police to lodge a complaint against him.

This seems to confirm the concerns raised by Kassim before invoking the curses against the Chairman, MP and the constituency executives.

NDC Must Stop ‘Ill-Judged’ Politics Of Coronavirus Debates –...
5 minutes ago