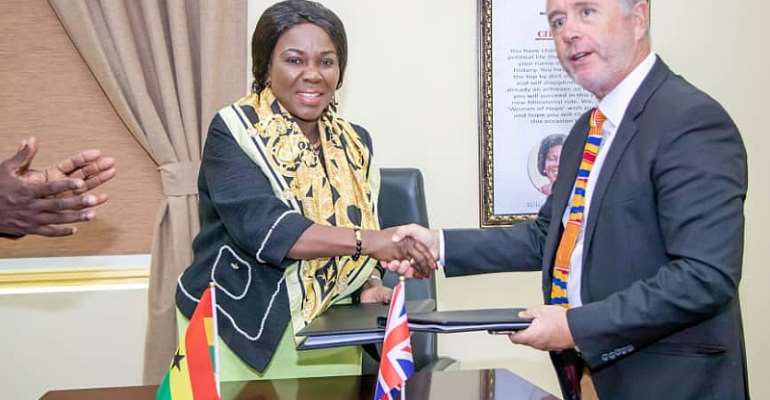 The Ministry of Sanitation And Water Resources has sealed a Supply Contract Agreement with British company, Aqua Africa Limited to enhance the delivery of potable water to rural and peri-urban communities in the country.

The agreement is in line with government’s vision of making clean water accessible to all citizens in all parts of the country as spelled out in the New Patriotic Party’s manifesto.

The Ministry of Sanitation and Water Resources, led by Hon. Cecilia Dapaah has been working tirelessly in the past two and a half years negotiating the deal with Aqua Africa Limited who specializes in the provision of clean sterile drinking water through Nano-filtration system.

Having secured approval from the cabinet, Hon. Cecilia Dapaah hosted the Founder and Managing Director for Aqua Africa, Mr. Philip Foster as well as the UK’s ambassador to Ghana, Mr. Iain Walker at her office today to sign the necessary paper works to seal the deal.

Speaking at the short ceremony, the sector Minister noted that her outfit is pleased to finally seal the deal and looks forward to the commencement of the project which will make clean water accessible in many comminutes.

“On behalf of the executive here, we are pleased that this event is coming on to seal and also announce the commencement of this project and all its complex nature because it is a new technology.

“We, first of all, had cabinet approval and provision of water is in line with government’s vision and it is spelled out clearly in our manifesto that Ghanaians everywhere should be provided with clean portable water”, Hon. Cecilia Dapaah noted.

On his part, Managing Director for Aqua Africa, Mr. Philip Foster stressed that not only are they looking forward to working on this project with the Ministry, but they also want to help the government achieve the ‘Ghana beyond aid dream’.

“We look forward to working in partnership not only on this project but on future projects and building the relationship with the British government and the Ghana government and supporting Ghana beyond aid”, he said.

Iain Walker who was also present to witness the signing of the deal expressed delight over the fact that a British company is partnering Ghana to help in the provision of portable water which he believes is critical to the wellbeing.

The Ministry is partnering with Aqua Africa with the help of the UK Embassy to provide portably and accessible water for deprived rural and peri-urban communities in 5 Regions including Greater Accra, Oti, Volta, Ashanti, and the Eastern Region.

The project will cover over 450 different locations and will deliver 225,000 people out of daily water poverty whiles costing half a pesewa per litre. The complex project according to Aqua Culture Limited has been signed with an approved amount of €30 million.

It expected to start in January of next year following the mobilization of all resources that will be needed to undertake the project and will be completed over a period of 18 months. 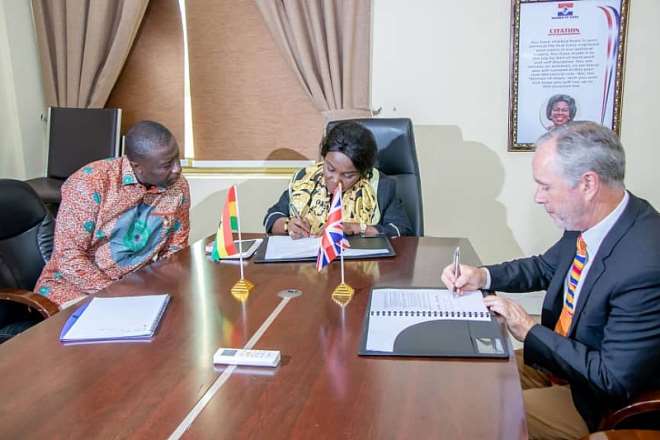