The Type Of Journalist That Ghana And Africa Need (2) 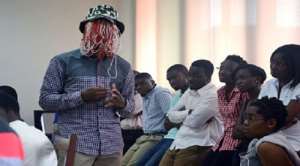 ONE of the most important stations at which I landed, as I made my journalistic “journey”, was the Ghana Broadcasting Corporation newsroom. And perhaps the most valuable lesson I learnt there was ACCOUNTABILITY.

Everyone listened to the radio, and they would let you know immediately if you made a mistake in a news bulletin!

Listen to this: one day we got a call in the newsroom immediately after an item on the Volta River Project had been read.

Who was on the line? It was our Prime Minister (as he was then) Dr Kwame Nkrumah!

He told the editor who answered the call, a former News Editor of the Graphic called Ben Sackey) that our bulletin had said that the new dam that was going to be built on the Volta River would be at a place called “Kosomo.”

The Editor thanked him but said “I don’t believe I am speaking to my Prime Minister!”

Dr Nkrumah laughed and retorted, “Whether you believe I am the Prime Minister or not is not important. What is important is that you give the people the correct information!” And he hung up.

For me personally, even more dangerous was to be assigned to cover Parliament. How do you summarise or paraphrase the heated arguments in a fiery debate on any subject by politicians opposed to each other to the hilt and make sure that you are fair to all sides? In those quicksands of political bias, I learnt how to “balance” a report. Added to speed and accuracy, fairness and “balance” were the hallmarks of my reports and we never received a complaint about our parliamentary coverage.

NOW, time constraints demand that I summarise the events on the rest of my journey. “DRUM” MAGAZINE: People will try and trap you into publishing false things about themselves, and use those statements to sue you in court for money! So always cross-check things you are told, especially if they are nasty. Learn the laws of libel thoroughly.

THE LONDON OBSERVER: Their standards of speed and accuracy are as strenuous as as those I had learnt at GBC. For their audience is world-wide.

The FINANCIAL TIMES of London is even worse. For people depend on it to invest their money. Once I was sent a loaded query by a reader who knew almost as much about the Akyem Abuakwa cocoa industry as myself, an Akyemkwaa. I could tell that the chap was speculating financially on the world cocoa price. It can be as bad as that.

Now I come to the core report I want to make to you about what I have found on my journey. It is this: the Ghanaian and African journalist must undertake a thorough self-education in – POLITICAL ECONOMY.

You can write the best English in the world; you can even invent new philosophical concepts as an academic. But for the educated African, if you don’t understand how the world economy really works and how it is rigged against our continent, you know NOTHING.

I pray fervently that those in charge of educating journalists should move away from the curriculum evolved for communication studies in the developed countries and devote a great deal of time to tuition by specialists in Developing Country Economics and Politics.

You may be the best writer in the world. But when you arrive with your black face in a white country, you will be thought of in the same manner as the poor migrant who has survived a journey to Europe or America in a rickety boat half of whose human cargo have drowned in the sea.

How many of us were taught “commerce” as a core subject at school? We almost thought it was a shameful subject meant for people who were not bright enough to do more glamorous subjects. But commerce is where it’s at. Our best academics get absorbed by the world’s best Universities. Because those institutions are financially viable. How come they are so rich?

They are rich because they invest in say, coffee-serving companies, who make over 90% profit out of every cup of coffee they sell, leaving maybe 10% to be shared by middlemen and coffee growers, who are lucky if they get 5%. DITTO FOR CHOCOLATE.

Ditto for cotton.
African journalists, as spokespersons for millions of people who have been cheated of a fair or living wage by a sleight of hand called “the world economic system”, ought to educate themselves so that they can explain imported inflation, fluctuations in commodity prices, shell companies that escape tax in the “poor” countries by operating shadow headquarters in tax havens – when our people fully understand these things, then they will regain the self-confidence which will enable them to elect governments that want to fight fearlessly for a fair share of the resources yielded to humankind by Planet Earth.

The good life wasn’t invented for a few humans. We are all supposed to share the earth’s wealth equally and fairly. And we need journalists to help us achieve that redistribution of the world’s wealth.

FOOTNOTE
Just after I had sent off the above article, I read this article

https://www.theguardian.com/world/2019/aug/05/zambia-seeks-to-expel-london-listed-copper-miner-vedanta It’s from the London GUARDIAN. It makes my point about POLITICAL ECONOMY most clearly!