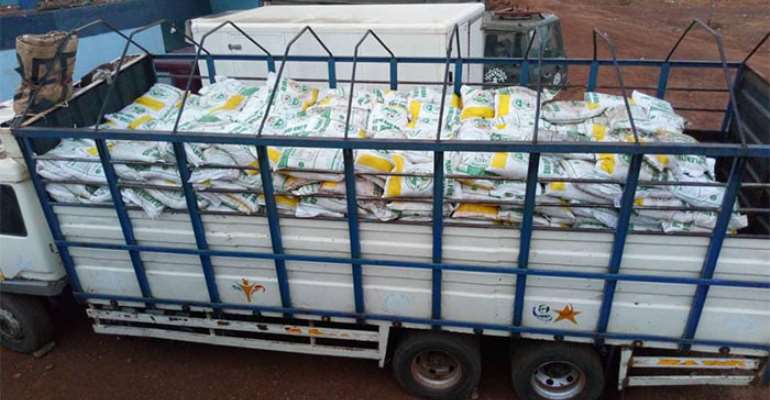 The trucks with fertilizers at Hamile customs office

Officers of the Ghana Immigration Service stationed at the Fielmuo check point in the Sisala West district of the Upper West Region have impounded two trucks loaded with fertilizers meant for Planting for Food and Jobs (PFJ).

The Ghana Immigration Service Officers received a tipoff that some trucks were smuggling the PFJ fertilizers to neighboring country Burkina Faso.

They trucks were stopped at unapproved route around Fielmuo check point.

The Hamile Sector Commander of the Ghana Immigration Service (GIS) Supt . Felix Agyeman-Bosompem , who confirmed the arrest to DGN Online said a total of 1,950 bags of Planting for Food and Jobs fertilizers were loaded on the two trucks.

“they told us that they were going to make a profit of GH 60,000 if they are able to smuggle the fertilizers to Burkina Faso and we have it on record,” he said.

According to him, the drivers of the trucks made an attempt to bribe officers with an amount of GH¢ 3,000 and when they rejected it they increased the amount to GH¢ 25,000.

He indicated that the GIS officers at the border were only six and for that matter called for military reinforcement for assistance.

Supt. Agyeman-Bosompem disclosed that the trucks were escorted to Hamile and handed over to customs officers for the necessary action.