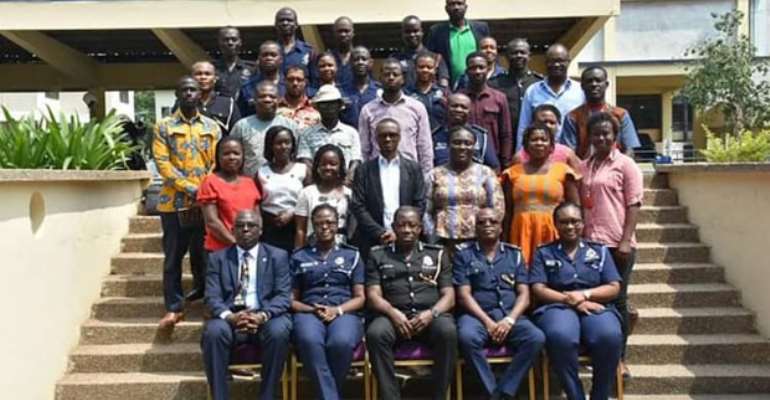 The journalists with some police officers after the training

The Ghana Police Service has held a two day training workshop for journalists on crime reporting.

The workshop which had about 30 journalists from the print and broadcast media, as well as online portals, was aimed at building the capacity of journalists on crime reporting and policing.

It is also intended to establish specialised desks at the various media houses to improve the quality of crime reporting and policing and also to strengthen the partnership between the police and the media.

At the opening ceremony, the Director General in charge of Police Administration, Commissioner of Police (COP), Ken Yeboah said the workshop is being organised pursuant to the communication and public education strategy of the police service to strengthen capacity of journalists to accurately report on crime and policing.

He said Reporting on crime and policing is a specialised area within the media landscape which requires adequate knowledge, orientation and capacity.

“Accurate reporting on crime and policing effectively supports the efforts of the police and harmonizes their work with other criminal justice actors.”

The Director General of Administration admitted that over the years, the relationship between the police and the media has remained cold and often triggered by some unpleasant misunderstanding and clashes between the two stakeholders.

“This turf war often affects objective reportage on crime and policing and further worsens the relationship.

As a result, the positive works of the police is normally overshadowed by bad press which invariably dents its corporate image and fuels tension between the police and the media.

According to him, it is imperative for journalists to think about their safety first before thinking about breaking the news.

Speaking on the topic, “frame work for police-media relations,” Prof Karikari said reporters should not lose their lives because they want to be the first to break the news.

“Where there is security problem, always cooperate with the police since they know best.”

Other facilitators for the workshop included Mr Boadu Ayeboafo, chairman of the national media commission, Superintendent David Hukporti of the CID operations, Chief Superintendent Rev. John Opoku, Director of Pips and Superintendent Sheila Buckman, of the public affairs unit among others.