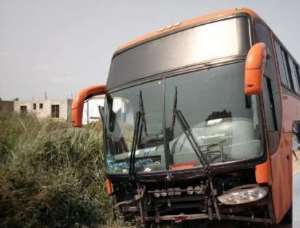 Two paddies on a motorbike died last Friday when the motorbike got involved in a head-on collision with a Nigeria bound bus around Kasseh, a suburb of Ada in the Greater Accra Region.

According to an eyewitness, the accident occurred at about 5:00 p.m. when the two were on their way from Addokope to Kasseh, while the CHISCO Transport Company's commercial bus with registration number KJA-62 XH was travelling from Accra to Nigeria with passengers on board.

On reaching a spot opposite the Ada Rural Bank Head Office on the Tema-Aflao highway, the motorbike rider attempted to overtake a car but in the process they veered into the lane of the oncoming bus, resulting in the gory accident.

The rider fell on the road and the vehicle ran over his body killing him instantly, while the other passenger who fell on the shoulder of the road was also ran over by the vehicle when the driver tried to park and attend to them.

The passenger had his leg severely damaged and was rushed to the hospital but died on admission.

However, passengers on board the bus escaped hurt but the bus had it bumper damaged.