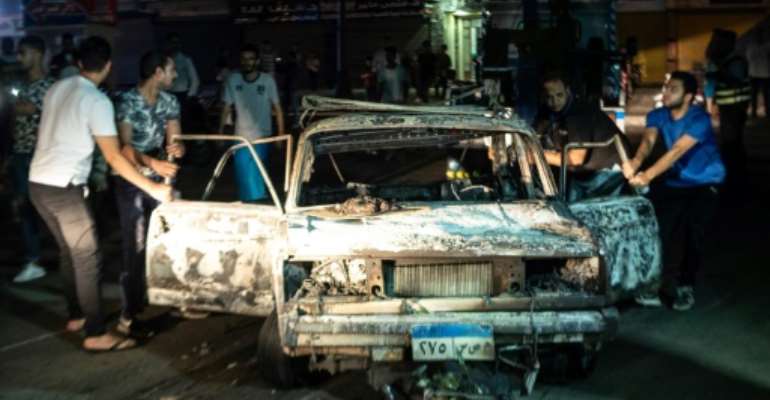 Twenty people were killed and 47 wounded in the incident in central Cairo. By Aly FAHIM (AFP)

A huge blast which killed 20 people in Cairo was caused by a speeding car packed with explosives, Egyptian officials said Monday as witnesses described carnage.

The car was driving against the traffic when it smashed into three other vehicles just before midnight Sunday evening, setting off a massive explosion just outside the country's National Cancer Institute.

"There were men without heads and people covered in blood making them unrecognisable," said Mohamed Fathy, a witness.

"Some of their heads were burnt on the ground."

Four of the 20 people killed remain unidentified, the health ministry said Monday, while 47 others were wounded.

Between "three and four (of the injured) are in critical condition in the intensive care unit," Khaled Megahed, a spokesman for the health ministry, told a press conference.

He said they suffered from burns of varying degrees.

Body parts were retrieved from the scene, he added.

In a social media post, he offered his condolences to the victims' families and the Egyptian people.

The interior ministry said a technical inspection indicated "an amount of explosives was inside the car, which caused it to explode when it collided." 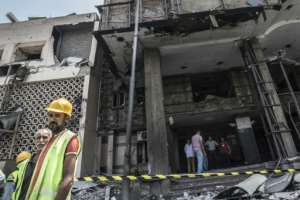 Another witness, Moham Zaki, said "it was raining rocks and iron -- I ran to my daughter to protect her. I saw she was hit by something in her head, was it part of a car?"

A third witness, Mohammed, said "at first we felt pressure, pressure around us and in our ears."

"After a while we heard an explosion, it was extreme -- we thought it was an earthquake."

Social media users posted footage of cars ablaze at the scene and of patients being evacuated from the Cancer Institute, which was severely damaged and charred in the explosion.

Megahed said 78 cancer patients from the institute were moved to other hospitals to continue their treatment.

Both the interior ministry and police said they suspected the Hasm group, an armed affiliate of the Muslim Brotherhood, of being behind the attack.

The Hasm group emerged in 2016 and has in the past claimed responsibility for several attacks.

Since then, Egypt has seen a surge in sectarian attacks targeting its Christian minority and security forces.

In February 2018, the army launched a nationwide offensive against jihadists, focused mainly on North Sinai, where the Islamic State group has a significant presence.

Egypt has just hosted the Africa Cup of Nations football tournament, which involved a massive security operation in Cairo and elsewhere to guard against attacks.

Heavily armed personnel and armoured vehicles took up positions around stadia, and numerous checkpoints filtered the flow of people seeking to enter arenas.