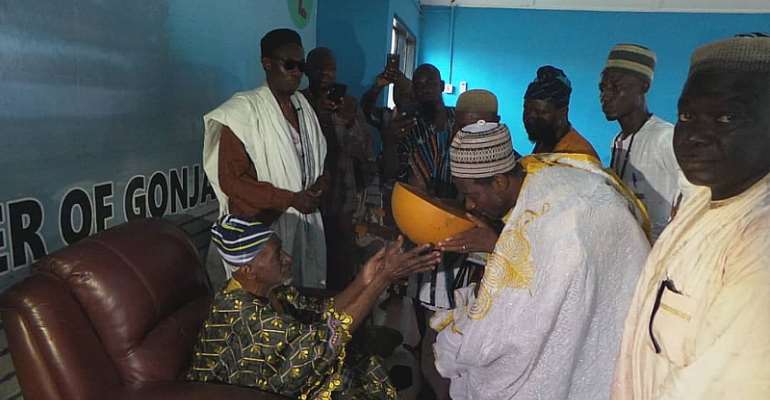 Since he assumed the Khalifa's position after the demise of his father Sheikh Abdulai Ahmed Maikano the President and Spiritual leader of the Tijjaniya Muslim Council of Ghana has never relented on his effort in continuing the good work of the first Chief Imam of the Ghana Army.

Damongo happens to be the host town of the Gonja land Paramount Chief's seat.

The Yagbon Wura and his people expressed their happiness in welcoming Khalifa and his entourage to the palace and the Savana region.

In his speech to show their appreciations, the spokesperson for the Yagbon Wura Alhaji Abdul Karim describes this year's visit as extraordinary.

He used the occasion to thank Allah for what he has done them through Khalifa's prayer. Alhaji Abdul Karim Added that the people of the Savana region have been yearning for a region for quite some time without positive result. But for the divine intervention as a result of Khalifa's prayer and support, they can now boot of a region.

The Yagbon Wura his royal highness Suleimana Tuntumba Boresa I reminded the gathering of a prayer request he made to Sheikh Khalifa some years back for a region even if not during his reigns, but was assured by Kalifa that it will happen during his lifetime and thank Allah it has come to pass.

Yagbon Wura on behalf of the people of the Gonja land expressed their gratitude to Sheikh and pleaded on him to continue his prayers and motivations towards the development of the Gonja land and the country at large.

On his part, his eminence Sheikh Khalifa praised the chief and the people for the warm reception granted him and his entourage.

He advised the youth not to give themselves up to people whose main aim is to disturb the peace the country is enjoying and to ensure justice in their day to day affairs.

He presided over Qur'an recitation at the palace and pray for the development of the Savanna and the other fifteen regions of the country.

The president and supreme leader of Tijjaniyya Muslim Council of Ghana, began the tour of the Savana region with a visit to Buipe to meet Buipe Wura Jinapor II at his palace.

From Buipe, Khalifa and his entourage continued the journey to Chaama, Kusawgu, Yapei and Daboya. In all these towns Sheikh Khalifa interacted with the chiefs and people including the Yapei Wura' Alhassan Suale III.