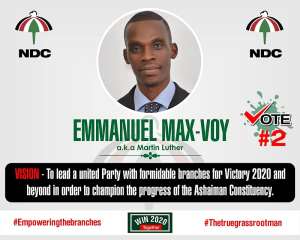 PARLIAMENTARY ASPIRANT of the National Democratic Congress (NDC) in the Ashaiman Constituency of the Greater Accra Region, Emmanuel Max Voy, has been reported dead.

He accordingly died some few days after filing his nomination forms to contest the party’s forthcoming parliamentary primaries.

The main competitor of the incumbent Member of Parliament (MP) for Ashaiman, Henry Ernest Norgbey, supposedly passed on Monday after a short illness.

His death comes as a surprise to many of his party members, especially those who picked the party nomination forms for the educationist, commonly called Martin Luther to contest the election.