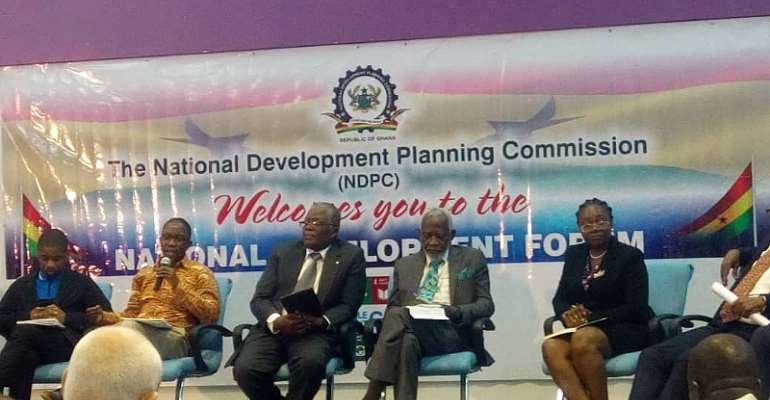 The Chairman of Economic Policy Committee at National Development Planning Commission, (NDPC) Dr.Nii Kwaku Sowa, has stressed the need for Ghanaians to engage in a meaningful way to finance the nation's development process over the decades.

Speaking at the 3rd National Development Forum held in Accra under the theme, "Innovative financing for Ghana @ 100 development agenda"

He maintained that lack of access to most funding sources due to the inability to satisfy preconditions for doing so.

"It is about time for us to look at these inhibiting factors so that we can gain access to all available financing sources. "

Dr. Sowa observed that the nation has just weaned itself off an International Monetary Fund, IMF supported programme and openly declared that its next phase of development will be on a "Ghana Beyond Aid" agenda.

"This is a drastic shift from what has been the norm for much of our economic history since independence."

"We have virtually lived off aid since we were born as a nation, we have become so dependent on aid that many are wondering if we can make it without aid."

It is a fact that the aid pipeline is drying up fast and we must think of other ways to support the country's development.

He said the amount of aid the nation received in time past were intended to stabilize the economy and was never sufficient enough for a "big push" into sustaining growth.

"Thinking beyond aid is an Africa-wide initiative led by the African Development Bank,(ADB) after the international financial crisis of 2008."

"Suppose we decided to make a trip from here to Kumasi our choice of vehicle will determine the kind of fuel we use we cannot choose to go by a V8 Land cruiser and fill its tank with premix fuel."

"It will also be unwise to buy only a small amount of fuel only to stop somewhere at Nkawkaw with a gallon looking for a top-up."

Dr. Sowa explained that when external flows to the developing world slowed down drastically it was observed that in the midst of slowed down of aid flow some African countries showed a very impressive growth rate.

We will focus on two major classes of financing: fiscal and non-fiscal the fiscal financing goes to support the national budget non-fiscal financing will include any other development financing: generally sourced from Banks, collective investment schemes, pension funds, and other domestic and external investors."

"While fiscal financing will exclusively for available to government, non-fiscal opportunities will be open to both government and the private sector" Dr. Sowa noted

According to him, Ghana external reserves was in excess of $260 million at Independence was touted as the star of Africa with a bright future

"The Nkrumah government proceeded to tackle development aggressively in short time, schools and hospitals were built, roads were built and import-substituting industries were created in no time, there were signs of development or modernization took place"