AcademicMamoudou Barry, murdered in France, to be buried in Guinea 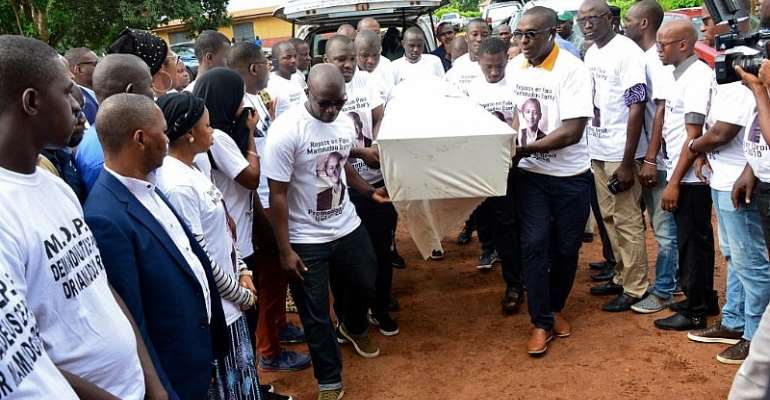 The body of Mamoudou Barry, the Guinean legal academic murdered in France last month, will be put to rest on Monday afternoon in his birthplace of Bolaro, Guinea.

The memory of Barry was honoured at Sonfonia Public University in Conakry on Sunday, where his body laid in state. Academics, friends, and family paid their last respects to the 31-year-old legal expert who was brutally murdered in Rouen, France, in July.

Barry was beaten to death by a man who allegedly had a history of psychiatric problems. The suspect is in custody. While motives have not been revealed by police, some have called this a racially-motivated hate crime.

Wrapped in the Guinean red, yellow, and green flag, an RFI correspondent observed that many who attended the two-hour ceremony at Julien Gbéré Touré auditorium wore t-shirts with his smiling face which read, “MDPF (Master in private fundamental law)” that called for justice for researcher Dr. Barry.

Barry's wife, Barry Fatoumata Diaraye, his brothers and sisters, the friends from France as well as three ministers and Constitutional Court President Mamdouba Bangoura were present to pay last respects to the young academic.

After the ceremony, the funeral procession stopped in Mamou, 300 kilometres from Conakry, where his body was brought to the Almamya Grand Mosque in the city centre, awaiting the funeral prayer by the head Imam.

The procession will head to Dounet prefecture, 30 kilometres outside of Mamou, with stops at Diatabaya, Hamdallaye, Kalia and Soloya villages, where more people will accompany the funeral procession before it reaches Bolaro, where he is scheduled to be buried at on Monday afternoon.