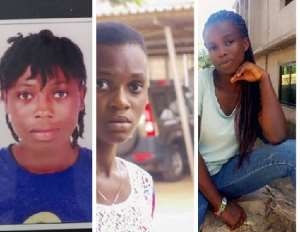 The online report last weekend about the discovery of human remains in a suburb of Takoradi and the unsubstantiated categorical addition that they belonged to the three missing girls has triggered a flurry of reactions across the country.

The aspect of the online report which pointed at sexual abuse of the girls was particularly berated by a cross section of Ghanaians.

Those who condemned the story think that a categorical statement that the remains belonged to the three missing girls is far-fetched because, after all, a forensic report is yet to be received from the forensic experts.

Expectedly, joining the fray are the parents of the three missing girls who have stated that the remains do not belong to their daughters.

Last Friday night, the media scene was eclipsed by the story about a police operation which led to the discovery of the remains of human parts shortly after the online news spread, according to a police statement.

The police statement did not specify that the remains belonged to the missing girls but explained that the law enforcement officers were led to the site of exhumation by the man who is suspected to have kidnapped the girls.

The head of the PR Unit of the CID Headquarters, DSP Juliana Obeng, in a statement, confirmed the police operation and the retrieval of the human parts.

“The building was previously occupied by convict Samuel Odoetuk Wills who is one of the accused persons standing trial for allegedly kidnapping the three Takoradi girls,” it said, adding “the discovered human remains would be sent to the forensic science laboratory of the Ghana Police Service for analysis and further investigation.”

The police being led by the key suspect in the kidnap of the girls, 28-year-old Samuel Udoetuk Wills to a place near an uncompleted building where the suspect resided with blaring sirens, attracted so many to the scene.

Not even the police stopping people from getting too close could give the necessary cover for the operation.

The suspect, who reportedly was not cooperating with the police, even as they tried to obtain leads for them to track the missing girls, made some disclosures which informed the movement to the Takoradi suburb.

Francis Bentum, father of Priscilla Blessing Bentum, the first girl to be kidnapped, told DAILY GUIDE that he believes his daughter is alive.

Having been told by the police that the girls were alive, he said he would not accept the story about the retrieval of the supposed remains of their daughters.

“We have not received any official information from the police on the new development. So we still believe our daughters are alive,” Mr Francis Bentum pointed out.

Rebecca Quayson, an elder sister of Ruthlove Quayson, the second victim, described the police operation as a diversionary tactic, adding “the alleged skulls they retrieved could be that of a male. All we believe is that we will soon see our sister.”

Alexander Kojo Koranchie, father of Priscilla Mantebea Koranchie, the last victim, also revealed that the prime suspect in the kidnapping case once called him and threatened to kill his daughter.

Mr Koranchie, who said he was restless when he heard the news on Friday evening, indicated that until the police carried out their investigations to prove that indeed the remains were that of the girls, he still believed that his daughter would be found.

An eyewitness who resides opposite where the police carried out last Friday's operation told DAILY GUIDE that she saw some people cordoning off the scene amid tight security at about 4 p.m.

“They later approached me for a machete, shovel and pick axe. Then I saw another batch coming and blowing sirens and so I realized they were policemen in plain clothes,” she added.

The eyewitness, a teacher, narrated that the personnel weeded the area including where the septic tank with four concrete slabs were. Continuing, she said a Ghana Prison Service cesspool vehicle arrived and started pulling the faecal matter from the septic tank.

“They then used a bamboo with nail on it to retrieve some human parts from the septic tank. These were put inside two boxes and transferred to one of the police vehicle at about 7:30 p.m.

Suspect At The Scene

“Then I saw Udoetuk Wills being pushed into another vehicle and they sped off,” she added.

She said: “The accused person might have used some chemicals to neutralize the stench originating from the decomposing bodies in the tank. A dead fish was found in a river into which the contents of the septic tank were discharged.”

On Saturday, police personnel, led by the Western Regional Police Commander, visited the family members of the three missing girls at their respective residence to officially brief them on the operation.

A police source told DAILY GUIDE that the personnel of the law enforcement agency appealed to the family members to make themselves available when necessary during a DNA text that would be conducted on the retrieved human parts.

Most residents of the Sekondi-Takoradi Metropolis were dumbfounded when they received the news about the retrieval of some body parts suspected to be that of the three missing girls.

What made matters worse was the fact that the police retrieved the body parts from a septic tank behind the house of Samuel Udoetuk Wills and that he led the police to the scene, dashing the hopes of the residents that the girls were alive.

The prime suspect, Udoetuk Wills, and his alleged accomplice, John Oji, are currently before a Sekondi High Court on the charges of conspiracy to commit crime, to wit kidnapping and kidnapping.

The country is waiting anxiously for the results of the forensic tests. As for the parents of the missing girls, their adrenalin level at this time can only be imagined.

In a related development, a cross section of Ghanaians have expressed concern about what for them is the insensitivity of media reportage about tragedies and called for circumspection in related reportage.