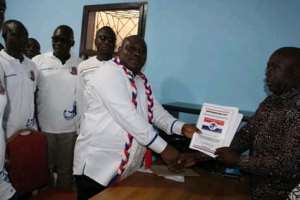 The Municipal Chief Executive for the Keta Municipal Assembly, Mr. Godwin Edudzi Effah, has filed nomination to contest in the upcoming parliamentary primaries of the ruling New Patriotic Party slated for September 28th, for the Keta Constituency.

The MCE filled his nomination on Friday, accompanied by party supporters amidst wild jubilations, coupled with drumming and dancing.

The MCE who assumed office in February this year, is touted by his supporters as a down-to-earth personality, with instincts of hardwork.

Speaking to the media after the filing, Mr. Effah told journalists that the Keta Constituency since 1992 have voted for the opposition National Democratic Congress in all elections but have not been rewarded enough by the NDC, leading to under-development of the area.

"...I have realized that since 1992, the NDC has ruled the country more than any other party but our Municipality has not seen much from the NDC for their continuous support and endorsement", he said.

He believes the NPP would win the 2020 elections and to ensure a match between the parliamentary representative and government, he is the best match.

"This time round, the NPP is in government but the people of the Keta Constituency are still in opposition because there is a mismatch.

"Until the light is dawn on our people to change the norm, to change the status quo; that's to elect an NPP parliamentarian for Keta, even though we are in power we are still in opposition so I urge my people to back me and get me into Parliament -that's the only way we can transform the Municipality/Constituency," the MCE intimated.

He assured the supporters of a total transformation of the Keta Constituency, if he gets the opportunity to lead the NDC into victory for the 2020 elections.

"In fact, Keta is going to be transformed, Keta would become modernised town. If I eventually become the MP, I will make sure that harbour project, I pursue it and make sure it's executed.

"A lot of development will come, in terms of agriculture, education and infrastructure. I am saying all these because I'm already on an errand, and of course you must start seeing me as an MP now," Mr Effah posited.

He added that his representation as an MP for the Keta Constituency would ensure youth empowerment, making sure that the youth acquire skills that would earn them a leaving which would further reduce crime rate in the area.

Though he's confident of the support of the party and victory, the MCE has Dr. Benjamin Dzamishie to contend with. 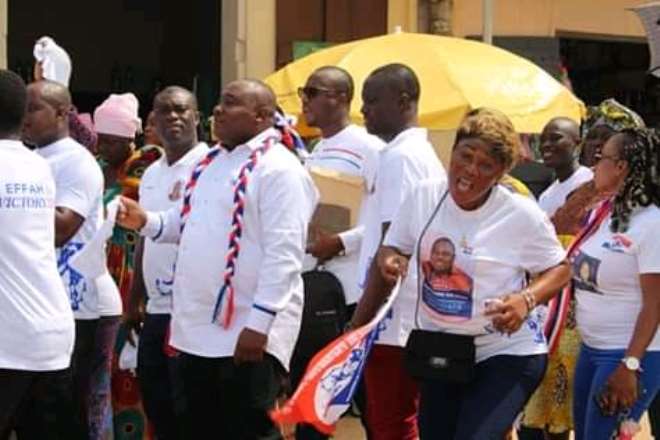 Minority Boycotts State Of The Nation Address
47 minutes ago