Support Government To Improve Infrastructure In Our Schools 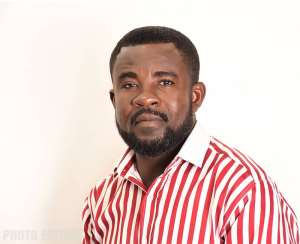 An Old Student of Nyakrom Senior High and Technical School (NYASTEC), Mr. Yawson Otoo, has admonished old students of his school and other educational institutions in general to contribute their quota towards infrastructure development.

Mr. Yawson Otoo, who is the Chief Executive Officer (CEO) of IKSON Properties Company Limited, noted that Old Students have a major role to play towards infrastructure development in the schools that gave them knowledge and skills.

"It's high time Old Students came together in unison to ensure that a conducive teaching and learning environment is created for students and teachers alike to project the image of our schools globally.

...We should be proud of the educational institutions that have made us what we are today. We couldn't have reached the level we are going to now. We (Old Students) ought to show appreciation for molding our various characters"

Mr. Yawson Otoo stated these when he donated a Hand Pump Machine with its accessories to the authorities of Nyakrom Senior High and Technical School to augment provision of potable Drinking Water to the Students at Nyakrom on Friday.

The Professional Engineer and Businessman also pledged to construct modern Electrical and Drawing classroom blocks for the school within a shorter possible time noting that the Ghc 2,500 Hand Pump Machine was to enhance assess to potable drinking water in the schools.

"I have just realized that the school which made me what I am today lack Electrical and Drawing classroom block for teaching and practical work. This is why I am pulling resources to construct befitting classroom blocks for Electrical Engineering and Technical Drawing students for better results.

...I believe this will motivate the students to perform better than expected. NYASTEC deserves better and we as Old Students have tasks ahead to harness its image.

Through our little contribution in whatever way be it in cash or kind can supplement government's efforts of ensuring quality education for our students. Over-reliance on government alone cannot solve the numerous problems facing our schools"

Mr. Yawson Otoo expressed the hope that his colleagues would emulate his little effort to support their previous schools accordingly thus stretching his hands to NGOs, Philanthropist, Churches, Civil Society Groups and individuals to assist schools in their locality to improve the standard of education.

The Assistant Headmaster of Nyakrom Senior High and Technical School In Charge of Academic, Mr. Simon Kumah who received the donation on behalf of the school thanked the Former student for his kind gesture saying it would be put into good use to serve its purpose.

" With the population of 1,400 students, 104 teachers, and 48 Non-Teaching staff, Nyastec like Oliver Twist will ask for more of such kind gesture to cushion us in our daily activities"

According to Mr. Simon Kumah, the machine if fixed would eliminate student's lateness to classes due to congestion during morning rush hour for water.

In a related development, Mr. Yawson Otoo has strongly advocated for proper layouts for Agona East and West District and Municipal Assemblies especially Agona Nyakrom to create enabling the environment and to curtail natural disasters.

In an interview with newsmen at Agona Nyakrom recently, the Professional Building Engineer and Businessman noted that the new layouts would go a long way to prevent people from putting up buildings without precaution measures.

He disclosed that he was personally sponsoring a new layouts Project that would not only cover Agona Nyakrom but would be extended to Agona Kwaman, Upper and Lower Bobikuma, Agona Abodom and Agona Nkum.

According to the CEO of IKSON Properties Company Limited based in Accra, discussions with both DCE and MCE for Agona East and Agona West, Hon. Dennis Armah Frempong and Hon. Mrs. Justina Marigold Assan respectively and various Works Department of the two Assemblies were far advanced.

"There are also ongoing discussions with Traditional Rulers and Land Owners to make the areas a better place to live.

In this project, the Town and Country Planning Department would create a Buffer Zone around the banks of River Akora which pass through Agona Nyakrom and Agona Swedru so that people would not build closer to the River to reduce flooding occurrence if the River overflows its banks

I want to conclude by appealing to Nananom and Land Owners in Agona East and West accordingly to give me their maximum support and Cooperation for this project to make Agonaman a better place where investors would not find it difficult in acquiring dispute free Land to invest thus creating job opportunities for the people" Mr. Yawson Otoo emphasized.