Cain Still Looks For His Brother To Kill Him Twice 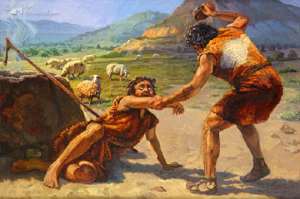 The Bible is full of interesting stories, not just mere stories but those with moral lessons to educate and give us the right direction to follow in the way Yahweh wants us. One of the intriguing stories about anger and jealousy, resulting in murder is Cain killing his own brother Abel.

From the days of John the Baptist until now, the kingdom of heaven has been subjected to violence, and violent people have been raiding it, thus; the history of the world is made up of wars and conflicts.

In all ages, there have been men who wanted to dominate by all means. In the past, great empires have reigned over billions of human beings. Even today the situation is not very different, there are still Cains looking for Abel to kill.

The mind of many people is not at rest and therefore, can't find peace. In their entire lives, they wake up in the morning saying prayers to the devil because bitterness, jealousy, and hate, rule the heart.

We speak of globalization as a necessity, which would solve the greatest problems of humanity but nothing works. They think they can have peace by destroying others but that doesn’t help them too.

Man continues to wage war against his fellow brother because of hate and jealousy but the true fact is when you hate someone, you are the one tormenting yourself not the victim.

At long last, your bad behavior and attitude will keep people away from you and no matter how hard you try in life or impress people, you'll fail and what comes next is frustration, as we are witnessing now from a particular columnist.

As long as the enemy the devil prowls around like a roaring lion looking for someone to devour, there are many Cains as well, looking for Abel to kill.

Therefore, be alert and with a sober mind, don’t allow tormented Cains to get near you. Keep on fighting with a prayer only, which is spiritually powerful than any weapon.