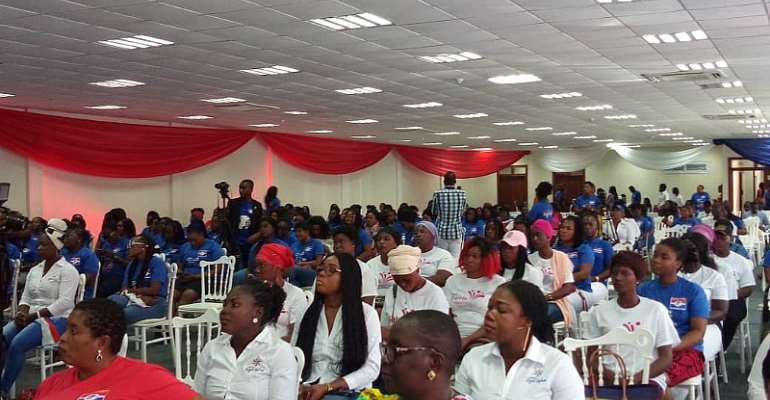 The Greater Accra wing of the New Patriotic Party’s (NPP) ‘Loyal Ladies’ group has held a Regional Conference to help bridge the gap between the top hierarchy and the foot soldiers who sacrificed to win power from the National Democratic Congress in the 2016 general elections.

The Regional Conference organized by the all-ladies group at the Accra Digital Center on Saturday, August 3, 2019, forms part of their three years anniversary celebration as they look forward to working tirelessly to retain power for the NPP after next year’s election.

According to the group’s president, Adwoa Pomaah Sanwu, the conference became necessary following several complaints from a number of foot soldiers over what they call neglect on the part of the top hierarchy since the party assumed power.

Speaking at the conference in front of invited party executives on the theme, “Bridging the expectation gap between party top hierarchy and foot soldiers; the key to victory 2020 and beyond”, Adwoa Pomaah Sanwu stressed that the success of every part is dependent on a collective effort and hence neglecting the foot soldiers after winning power is unhealthy for its future.

“In every political dispensation, successes are achieved collectively with the help of various people from different walks of life and social statuses pledging unending commitment to seeing the political party they belong to hold the reign of the government for as long as possible”.

“The hard work and loyalty of such persons must never be forgotten although responsibilities may increase. The quest to see the nation develop must not also make us forget the hard work of such individuals, some of whom may have lost their jobs, properties or families in their quest to see out party attain power, she noted.

Speaking in an interview with Modernghana on the sidelines of the conference, Managing Director of SIC Life Savings and Loans, Madam Amma Frimpomaa Dwumah has assured the group that the Nana Addo led administration is committed to sorting out everyone who contributed to the party’s victory in 2016.

Loyal ladies is a volunteer group under the youth wing of the NPP. As its name implies, it’s an all-female group. The role of women more especially the young women in the success of a political party in elections can’t be overemphasized.

As a result, the goal of loyal ladies as a group is to reach out to the electorate in all the nooks and crannies of the country to ensure success for the New Patriotic Party in the upcoming 2016 December election and all subsequent elections.

They were instrumental to the party’s success during the 2016 general election when the NPP wrestled power from the erstwhile Mahama administration.