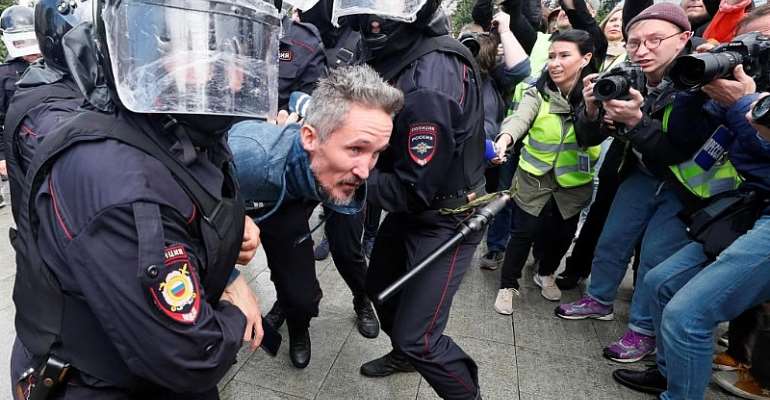 Germany on Sunday said Russia had violated its international obligations to "free and fair elections" after hundreds of protestors were detained at an opposition demonstration in Moscow.

The arrests made on Saturday were "out of all proportion to the peaceful nature of the protests against the exclusion of independent candidates" from city elections in Moscow next month, said the German government.

In a statement, Berlin condemned "the repeated interference in the guaranteed right to peaceful assembly and freedom of expression" which "violates Russia's international obligations and strongly questions the right to free and fair elections".

Police detained over 800 people at an opposition gathering in Moscow on Saturday, as authorities upped the pressure on top Kremlin critic Alexei Navalny by launching a criminal probe into his anti-graft group.

Crowds walked along the capital's central boulevards in a protest "stroll" over the refusal by officials to let opposition candidates run in September polls for city parliament seats -- a local issue that has turned into a political crisis.

Most of those candidates and opposition leaders, including Navalny, are being held by police following a protest rally last weekend, in which 1,400 demonstrators were detained -- one of the biggest crackdowns in years.

On Saturday, riot police were deployed in large numbers in central Moscow, some shops and cafes were shut, metal barriers were erected, mobile internet was down for many hours, and a metro station was temporarily closed.

Some 828 people were detained during the rally, independent protest monitor OVD-Info said.

Police said only 1,500 people took part in the gathering.