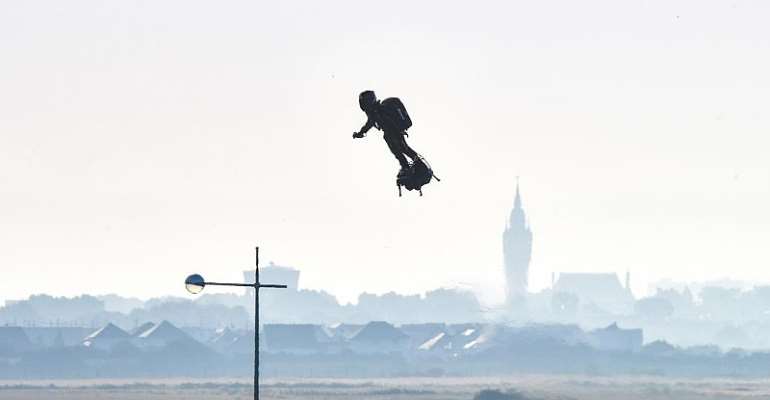 On Sunday Frenchman Franky Zapata succeeded in crossing on a jet-powered hoverboard on his second attempt. Hereare five other ways you might want to try.

1. By plane
The first aeroplane flight between France and Britain was exactly 110 years ago by French constructor and aviator Louis Bleriot.

His monoplane took off from Calais on July 25, 1909 and landed in Dover 37 minutes later. Zapata scheduled his first attempt for the anniversary of Bleriot's feat.

In 1979 US cyclist Bryan Allen made the same crossing on board a pedal-powered aeroplane, taking three hours.

2. By balloon
In January 1785 France's Jean-Pierre Blanchard and American John Jeffries became the first to cross the Channel by hot-air balloon. Leaving from Dover in England, they touched down in a forest three hours later near Boulogne-sur-Mer.

More than two centuries later, in May 2010, US adventurer Jonathan Trappe made the crossing in a chair carried by a cluster of 55 multicoloured helium-filled balloons.

He travelled around 100 kilometres (62 miles) from Ashford in Kent, England to a French field outside Dunkirk.

3. Swimming
In August 1875 Britain merchant marine captain Matthew Webb became the first known person to swim across the English Channel, which he did in 21 hours and 45 minutes.

American Gertrude Ederle was the first woman to do so in August 1926. She took 14 hours and 31 minutes.

4. On the water
The first hovercraft crossing was in July 1959, piloted by Briton Peter Lamb and taking around two hours.

In August 1984 British brothers Rick and Stephen Cooper did the same on a pedalo in a little over eight hours.

Former French cyclist Yvon Le Caer pedalled across on his AquaCycle in September 1985 for a 148-kilometre (92-mile) route that took under 17 hours.

Frenchmen Dominique Vaast and Francois Bocquet used a two-person kayak to cross in June 1986. Their 200-kilometre trip between Portsmouth and Le Havre took just over 26 hours.

In September 1987 British swimming coach Steve Butterworth, who had one leg amputated, made the journey on monoski pulled by a small speedboat.

5. Glider and parachute
In November 1988 French inventor and adventurer Yves Marre crossed in a homemade motorised glider in about 90 minutes. He was briefly held by British customs officers when he landed in a field near Dover.

French navy officers Thierry Demonfort and Bertrand de Gaullier were in November 1999 the first to make the crossing by parachute. They jumped in a two-person parachute from 8,000 metres (26,400 feet) at Dover and landed near Calais after 25 minutes.

In July 2003 Austrian daredevil Felix Baumgartner jumped from a plane about 9,000 metres above Dover and glided to France in 35 minutes, wearing only a specially-designed suit with a 1.80 metre (six-foot) long carbon-fibre wing. He landed by parachute.

In September 2008 Swiss adventurer and pilot Yves Rossy made the France-Britain crossing in under 10 minutes using only a jet-powered carbon wing strapped to his back.

He started by leaping out of a small plane at 2,500 metres and reached speeds nearing 200 kilometres before deploying a parachute to land.