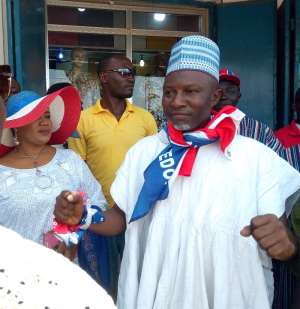 Business mogul and philanthropist, Alhaji Abdul Malik Anala, has sworn to lead the NPP in the Ayawaso North Constituency to grapple the seat from the opposition NDC who has occupied the seat since it was carved out of the Ayawaso East constituency in 2012. He made this known in Accra after filing his nomination to contest the seat.

‘Brother Mike’, as he is affectionately called, has been a financier of the party in the Ayawaso North constituency over the years. And has promised to support the party in a better fashion if elected as the next parliamentary candidate of the NPP in the constituency. He opined that he was the best among the lot to lead the party at this material moment because loyalty, long service, humility, accessibility, competence and above all a committed party person will be key going forward; and he stands tall among his peers.

The Business magnate stormed the party office amidst drumming, dancing and funfair in the company of hundreds of delegates and party supporters. He sporadically responded to cheers from traders and residence on the busy Accra Newtown Highstreet, who are tired of the NDC rule in the constituency.

Addressing constituency delegates and party supporters after successfully filing his nomination, Alhaji Malik noted, “It is time for the NPP to unite and wrestle power from the NDC who has nothing to show after several years of holding the seat. Empowering the Youth and Women, Poverty Reduction, Education, Creating Job opportunities for my constituents will be my main preoccupation as MP”.

He continued, “With the crowd you have seen today, I am more than confident that I will be elected to redeem my people from the incompetence of the NDC in the Ayawaso North constituency. My confidence is based on the numerous assurances and support I have received regularly from the delegates and good people across the 89 polling stations. And I am convinced our discerning delegates will reward my patriotism, selflessness, hard work, commitment and loyalty over the years.”

He added that he was not only going to win the internal primaries, but was also going to beat the NDC candidate in the 2020 general elections. “I have had the opportunity to address societal issues in diverse ways throughout my life experience; and until now, I have always done things from behind. But with time, I have realized that the best way to bring about the desired change is to step-up and embrace the challenges by the horn. There is no middle ground as at now, that is why I am putting myself up to serve my people.”

The Ayawaso North is one of the constituencies represented in the Parliament of Ghana located in the Greater Accra Region . It was created from Ayawaso East constituency in 2012 and has since been held by the opposition NDC in parliament. In the last election, the NDC parliamentary candidate, Yussif I. Jajah pulled 22,144 representing 59.97% as against the NPP candidate, Aminu Mohammed Zakari, who pulled 14,644 representing 39.66%. If Alhaji Abdul Malik Anala wins the NPP primaries, he will have the herculean task of overturning the about 7,500 votes deficit.

Alhaji Abdul Malik Anala was born in 1962 in Tamale. He went St. Joseph primary and middle school in Tamale and completed in 1982. He then left for Kumasi in 1983 to start business. In 1986, business too him to Nigeria. He returned to Ghana briefly in 1989; and then went to Hamburg, Germany in 1990. After 5 years of international business exposure in Germany, he returned to Accra in 1995 to established his business back home.

Alhaji Malik, has been a registered voter and member of the New Patriotic Party (NPP) since 1996. He registered at ‘Behind the Toilet Polling Station’, formally, ‘Nim Tree Poling Centre’ in the then Ayawaso East Constituency. So, he is currently registered at the Kwaotsuru Electoral Area, Zone 3, in the Ayawaso North constituency

‘Brother Mike’ as he is affectionately called is a self-sufficient man capable of running a campaign to annex the seat. He has been a major financier of the party over the years. Quite recently, he supported the party’s united and re-organization trip to Aburi with 4,000 cedis; as well as supporting the party in the recent EC Limited registration exercise

His vision is to transform the New Patriotic Party (NPP) in the Ayawaso North Constituency to be an attractive option for voters. He is a loyal, accessible, daring, humble, competent and committed party person. Alhaji Malik Anala is a man who gets things done through self-participation. He leads by example and sets the tone for team work.

Alhaji Abdul Malik Anala has a unique personality. He is an influential advocate in the transformation of the party in the constituency over the years. He has sacrificed his own resources countless times towards the running of the affairs of this party since 1996. To him, the ultimate responsibility of every prudent leader is to serve and not to be served.

A down to earth man who has the people at heart; and capable of working and associating with all manner of people. He is goal oriented and never gives up. He is an experienced and competent man who has served the party diligently over the years.

His desire for results is readily apparent to the people he has led and worked with. And he likes people who positively criticize and challenge his thoughts.

Alhaji Malik is very logical, decisive, prudent and critical in his problem-solving activities. He does not believe in the principle of the ‘Blame Game’. He is a good problem solver always seeking new ways to solve even old problems. If there is anything negative about this man, then it is about him loving the party too much and working too hard to reach goals set by the party.