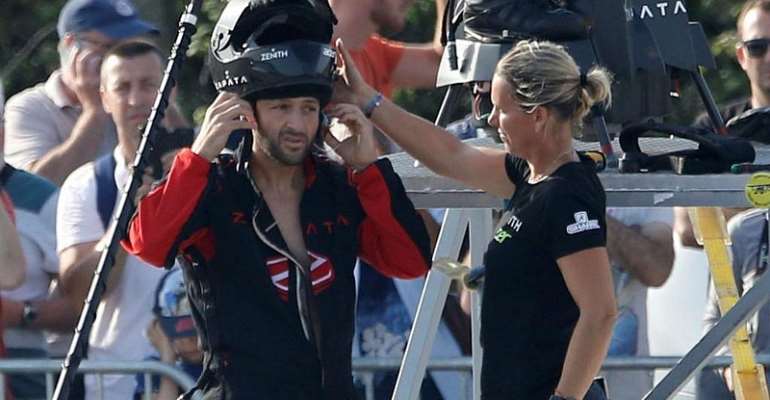 French inventor Franky Zapata has zoomed across the English Channel on his jet-powered flyboard, making the 35k crossing between Sangatte on the northern coast of France and St. Margaret's Bay in Dover in twenty minutes.

Escorted by three helicopters, Zapata successfully refuelled by landing on a support vessel about halfway across the Channel.

His first attempt last month ended when he and the machine fell into the water while trying to land to take on more fuel.

The five turbines on the former jet-ski champion's craft propel him at speeds of up to 190 kilometres an hour, powered by a backpack full of kerosene that can keep him airborne for approximately 10 minutes.

Zapata has been developing his hoverboard for the past three years, despite losing two fingers during its maiden flight in his garage near the southern French city of Marseille, when his hand was sucked into the turbines.

He already holds the Guinness World Record for the farthest hoverboard flight, a 2.2-kilometre trip over the Mediterranean Sea in April 2016.

No Guinness adjudicator was on hand for the latest Channel attempt, though a spokeswoman said he could still be awarded a new record if the trip meets the publication's guidelines.

Zapata burst into the spotlight at this year's 14 July Bastille Day military parade in Paris, where he and his craft soared noisily above a crowd of stunned onlookers that included French President Emmanuel Macron.

I'll Complete All My Abandoned Projects By This Gov't — Maha...
44 minutes ago