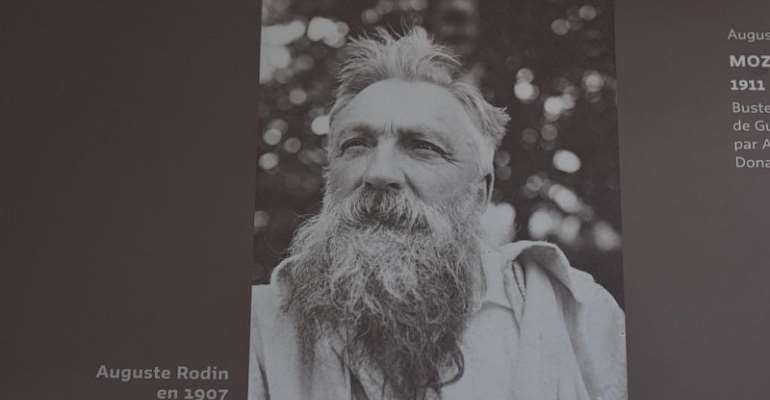 The Rodin Museum, home to the works of the famed French sculptor François-Auguste René Rodin, celebrates its 100th birthday on 4 August.

The museum was initially housed in a mansion called the Peyrenc de Moras Hotel, now known as the Biron Hotel. It was built in Paris between 1727 and 1732 for the wealthy financier Abraham Peyrenc de Moras.

The estate was put up for sale in 1905. In the meantime, tenants could occupy Biron Hotel.

Among the tenants were Jean Cocteau, Henri Matisse and others who eventually told Rodin about the estate.

Finally in 1908, Rodin rented four south-facing, ground floor rooms to use as his studios.

And from 1911 onwards, he occupied the entire building, while keeping his main house in Meudon, just outside Paris.

The property was finally sold to the French government in 1911.

All occupants were asked to leave except Rodin who entered into negotiations with the state, explaining that he wished to see the property used to house his works.

That wish was granted in 1916 when the French National Assembly voted to accept the sculptor's three donations and position them in the mansion and garden calling it the Musée Rodin. The doors were finally opened to the public in 1919, the artist having died two years earlier.

Legacy of Rodin
“When I met Rodin, my voice dried up. I couldn't say a word to him and stood among the statues like one of them myself” wrote author Stefan Zweig in his memoir The World of Yesterday.

Zweig writes about meeting Rodin in 1905 in Meudon, at a time when the artist had become world-renowned at the age of 65.

But the sculptor's rise to fame didn't come easily and his unexpected foray into sculpture wasn't obvious from the start.

Early talent overlooked
Born in Paris on 12 November 1840 to a working-class family, Rodin began to draw at the age of 10. He then attended the School of Decorative Arts, or la Petite Ecole between the ages of 14 and 17 that specialised in art and mathematics. There, he studied drawing and painting with a curriculum that mainly focused on 18th-century rococo art, which might be why when he applied to the renowned Ecole des Beaux-Arts (School of Fine Arts) in Paris, he was rejected, not once but three times.

The judges were likely more partial to neoclassical art than what he had been studying.

Finally, realising he had no future through that door, he opted to earn a living as a tradesman, specifically with a jeweler where he learned to mold decorative objects and began to realise his true talent.

Set back
His older sister, Maria, whom he was close to, died while in a convent in 1862. Grief stricken, Rodin abandoned his art and joined a religious order.

The founder of the congregation soon recognised Rodin's artistic talent over his religious devotion and encouraged him to return to sculpting.

That inevitably sent him back onto to the path of delving into his art.

While taking classes with animal sculptor Antoine-Louis Barye, Rodin learned about attention to the fine musculature of animals.

A detail that heavily influenced Rodin in work.
Dante's role in inspiration
For the next two decades, Rodin made a living as a craftsman in decoration where he fine-tuned his skills of molding and detail. .

He produced his first sculpture for exhibition in 1864 but it was really during his time in Belgium in 1870, where his biggest influence in his work would start to take root.

During his six years in Belgium, he travelled frequently to Italy where he was deeply affected by the work of Michelangelo and Donatello and Dante Alghieri's Inferno, from the Divine Comedy.

This time in Italy prepared him for his inevitable return to Paris, where he produced his first important work, The Age of Bronze, one of his famous works that fully showcased his talent in replicating the natural lines of a model, based on a Belgian soldier

The statue caused a public sensation, with rumours circulating that he hadn't actually sculpted it but had it cast directly from a body.

To avoid such a problem in the future, Rodin purposely created larger than life sculptures so no one could think it was cast directly on a person.

Finally in 1880, Rodin's big break came. He was commissioned to design the portal for a museum of decorative art in Paris.

While the museum itself was never built, it gave rise to his famous structure 'The Gates of Hell' which remained unfinished even after his death.

The Gates of Hell were inspired by Dante's Divine Comedy and would prove to be a constant obsession in his life. His initial vision for the gate continued to evolve.

The constant changes soon came to represent the evolution of Rodin's inspiration, and some referred to it as 'the diary of his sculpted life'.

In fact two of his most famous pieces, 'The Kiss' and 'The Thinker' were initially meant to be small figures to sit on the monumental gates.

Stages of production
Over the years, his skill and reputation continued to grow.

What first began through a drawing, with attention paid to the small details of what he observed, was often the first stage in the process of his creation.

Afterwards, his skills shone in recreation of such fine forms of bodies or facial expressions in a mound of clay.

His approach to creating was different from what most artists had learned from the Ecole des Beaux Arts, mainly because of the training he had received as a craftsman.

He worked with highly trained plaster casters, carvers and founders as well as studio assistants.

Together, they turned his original models into finished work.

Although he has been photographed with a chisel and hammer, he never carved in marble or other stone. Rodin's skill lay in the modelling of clay and in drawing.

Controversy
While he didn't set out to shake-up the world of sculpture, Rodin had a knack for it.

One such controversy came from his sculpture of the famed French writer Honoré de Balzac who died in 1850.

To commemorate the author, Rodin was commissioned to create a portrait of Balzac.

He worked on this for six years, stripping the writer of his known elements such as his armchair or a book. What was left was something that evoked the author rather than resembled him.

It created such outrage that when it was unveiled in 1898 the commission was cancelled and it was never cast in bronze.

Women
Rodin was no stranger to charming women and through their admiration of his talents, attracted quite a few artists, dancers, actresses and even aristocrats to his studio.

The most significant of these women was Camille Claudel, who came to work for Rodin as one of his assistants in 1883 at the age of 18.

She soon discovered her own talent for sculpture and, after growing weary of Rodin's alleged efforts to thwart her progress, ended the relationship, and destroyed much of her own work. She died, decades later, in a mental hospital.