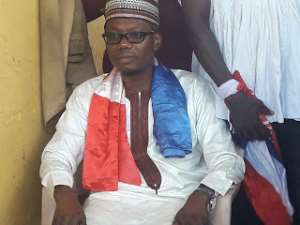 An Economist at the office of the Senior Minister has today filed his nomination papers to contest the position of parliamentary candidate for the New Patriotic Party in the Tamale North Constituency.

Adam Habib, clad in party colors and in the company of multitude of motor - riding youth arrived at the Constituency makeshift party office at Taha, a Tamale suburb, where he was received by constituency executives including Chairman, Alhaji Yipel Naa.

Mr Habib after submitting his papers addressed a gathering of party faithful, promising he was going to provide a befitting party office, empower the youth and win the ever-elusive Tamale North parliamentary seat for the governing New Patriotic Party should he be endorsed by delegates in the party's upcoming internal polls.

He appealed to his teaming supporters to play safe by avoiding needless confrontation with perceived opponents, saying the contest was internal and that in the end unity was vital to capturing Tamale North.