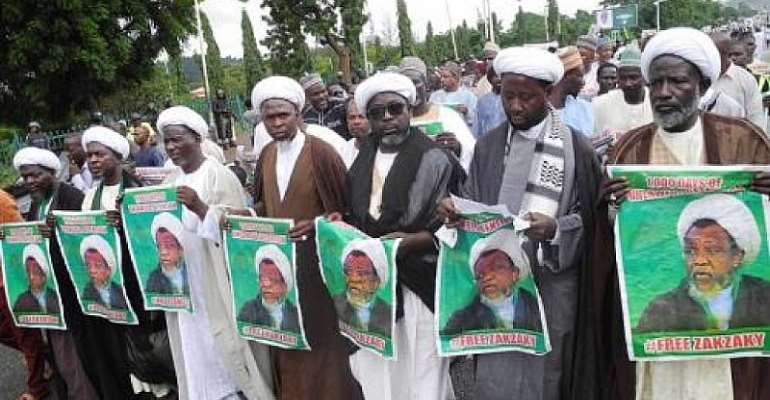 Nigeria's religious leaders step in to calm tensions over the proscription of the country's leading Shi'ite organization. Daily Trust newspaper reports that the Sultan of Sokoto and Cardinal Onayekan are currently working behind the scenes with leaders of the Islamic Movementof Nigeria (IMN), to find a way out of the crisis.

The Federal Government outlawed the IMN, after an Abuja High Court found it followers responsible for the fatal shooting of a police chief and a journalist during a protest in the capital Abuja on July 22.

The intitiative by the Inter-religious Council of Nigeria was announced, after the controversial Shi'ite group said it was calling off demonstrations to secure the release of its leader Ibraheem El-Zakzaky.

The IMN's spokesman Ibrahim Musa said they were suspending daily protests in Abuja ”to prove their good faith and show respect for eminent people and groups whose input in the resolution of the problems appears genuine”.

Confusion
Sahara Reporters claims there are dissenting views within the IMN over the way forward.

The publication points to a video shared on her Facebook page by El-Zakzaky's daughter Suhaila, denying any plans by the group to suspend the demonstrations.

“Even as I speak, right now, earlier today, there was a protest in Abuja and there will be tomorrow, until my father is released”, said Suhaila Ibraheem.

Vanguard recalls that Cheikh Ibraheem El-Zakzaky, his wife and other leaders of the fundamentalist group have been in the custody of the State Security Services, since 2015 after IMN followers attacked a convoy of Nigeria's army chief in Kaduna State.

The IMN accused government forces of killing 300 of their supporters during the incident, which the Nigerian military denies.

The proscription of the organization which claims to speak for Nigeria's minority Shi'ite Moslems, comes at a time of rising tensions between Nigeria's Shi'ite community and the government over El-Zakzaky's continued detention despite his ailing health.

“We already have two judgements in their favour by the Federal High Court ordering the government since December 2016, to release them”, notes Femi Falana, head of El-Zakzaky's legal team.

But he explains that while the IMN leader and his wife face trial at a Kaduna High Court in another criminal case, they had applied for permission to seek urgent medical treatment abroad.

“Zakyzaky is suffering from glaucoma in the remaining eye, having lost the other”, the Nigerian lawyer stated.

“Doctors have confirmed that the couple suffered lead poisoning arising from bullet shrapnel which have not been removed since November 2016, when they were shot at by soldiers”, stated Femi Falana.

However, several Nigerian newspapers quote government doctors, who examined Cheickh El-Zakzaky as saying that his condition didn't warrant an evacuation to India, as requested by his medics.

Nigeria's Shi'ite nightmare
Meanwhile, a senior Moslem leader regrets that the Federal Government hasn't threaded cautiously with its handling of the socio-cultural and politico-religious revivalist movement,  founded in the late 1970s.

“People in the rural areas and villages understand it as a proscription of Shi'ism in Nigeria”, warns Mohamed Sani Issa, Director of intervention at the Inter-faith Mediation Center in Kaduna.

“Government must now work hard to differentiate the IMN from the Shi'ites, so as to safeguard peaceful co-existence and security of the country” Sani Issa said.

Suspicions have been growing in Nigeria especially among Moslem academics that the Islamic Republic of Iran was trying to use the IMN crisis as another testing ground for their struggle for regional supremacy.

Iranian villain
“When the IMN started in the late 1970s, they were a group of radical Islamists who wanted to copy the Islamic revolution in Iran, recalls Abubakar Kari, professor of political sociology at Abuja University.

As he explains, at that time, its leaders repudiated the Nigerian State and the public school system, hoping their religious struggle would crystallize into the creation of an Islamic Republic in northern Nigeria.

“The underline objective of the Islamic Movement of Nigeria, ultimately is to create an autocratic state either in the whole country or in parts of the country, institutionalize Iran's type of Islam, with a large dose of Shi'ite doctrine”, cautions Professor Kari.