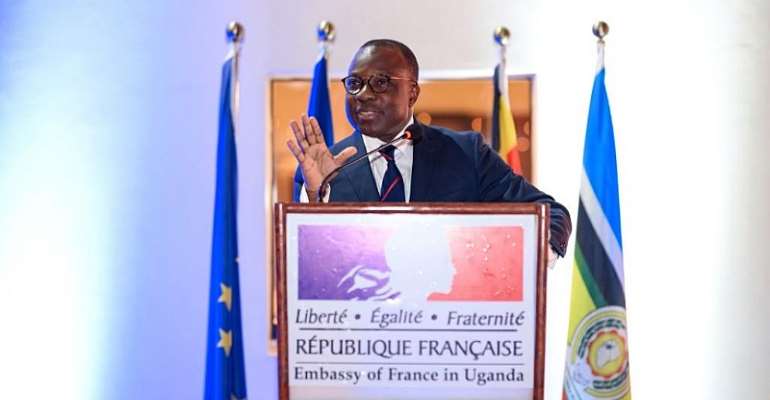 Franco-Beninese diplomat Jules Armand Aniambossou replaced outgoing ambassador Stephanie Rivoual at the head of the French embassy in Uganda in May. His arrival has peaked the interest of Ugandans and also raised the hopes of stronger economic cooperation between the two allies.

Aniambossou was given the stamp of approval this week from Uganda's Foreign Affairs Minister Sam Kutesa, who expressed his desire to strengthen bilateral ties through greater commercial cooperation.

The new ambassador, who burnished his credentials at the French embassy in Benin, the UK, Greece and also at the Organisation for Economic Co-operation and Development (OECD), has equally promised a robust agenda.

He wants to take advantage of the presence and investment of French companies in Uganda “to provide a sustainable training force for employment,” Aniambossou said in a speech last month.

"Military cooperation is strong," says Alfred Onek, a spokesperson for the French embassy in Uganda.

"France is training Ugandan soldiers who are posted to Somalia, and they're even training mountain brigades, which is the first of its kind," he told RFI during a visit to Paris.

Their cooperation is also economic. French companies such as Total and Lafarge have made substantial inroads, Onek adds, saying that "Total is taking the lead in the oil sector."

In 2009, Kampala discovered its first oil wells after years of painstaking exploration.

"We expect that by 2021 we should be having the first oil come out, and Total is heavily involved, heavily engaged there. So relations are quite warm," he said.

French fantasy
For the past two years, Uganda has organised a festival known as Friendship Week, bringing together ministers, distinguished guests to celebrate French language, food and culture.

East African Community heads of state are currently in talks to make French the second international language after English.

"When you ask Ugandans what they love about French, they say Paris," continues Onek, adding that the city of love has enticed potential honeymooners.

"There's a fantasy about France, about the French people." A fantasy that he says is not likely to end anytime soon.