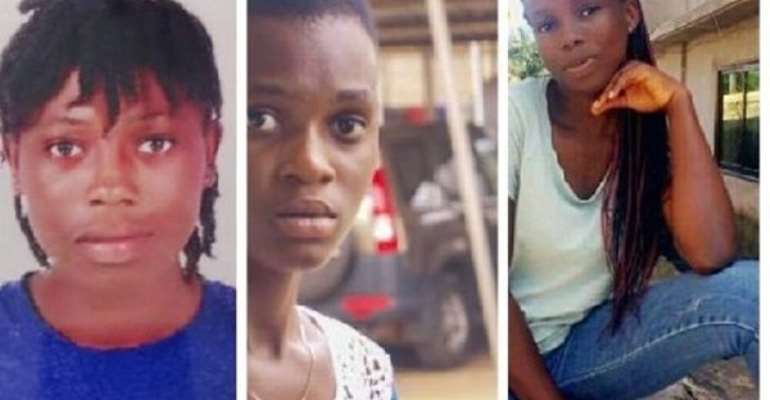 Families of the three missing Takoradi girls have said that the Human body parts, two skulls that were exhumed by the police investigating the kidnapping of three girls in Takoradi, from the backyard of the prime suspect, Samuel Udoetuk Wills at Kansaworodo are not that of their missing relatives.

Speaking on Otec FM morning show dubbed KEJETIA hosted by ace broadcast journalist Captain Koda, on Saturday August 3, 2019, Miss Kate Quayson an elder sister to one of the missing girls Ruth Quayson indicated that the families do not believe the said human parts are that of their sisters.

The three girls, Ruth Quauson, Priscilla Blessing Bentum and Priscilla Koranche have gone missing and believed to have been kidnapped between August 2018 and January 2019 and have since not been found. Police have since mounted a thorough investigation and search for the girls.

A press statement from the police CID on Friday August 2nd stated that they have been able to retrieve some skeletons from a septic tank in an uncompleted building at Kansaworodo in Takoradi which was previously occupied by Samuel Udeotuk, one of the accused persons in the case.

Even though the police are yet to identify the found skeletons, there have been several comments by the public and a section of the media linking the found human parts to be that of the missing Takoradi girls.

According to her, the suspects whose house the skeletons were found was arrested few days after the disappearance of the girls and therefore makes it difficult for them to believe the girls have been killed.

Samuel was arrested just 2 days after the missing of Ruth and Priscilla so how was it possible for him to have killed the girls and for what reason will he have killed them? Kate quizzed.

Kate Quayson added that a visit to the location where the bodies were found had no bad scent clarify that a dead body had been in the vicinity.

She says even though the families are waiting for a detailed report from the police, they are certain that those human decomposed parts are not their sisters.