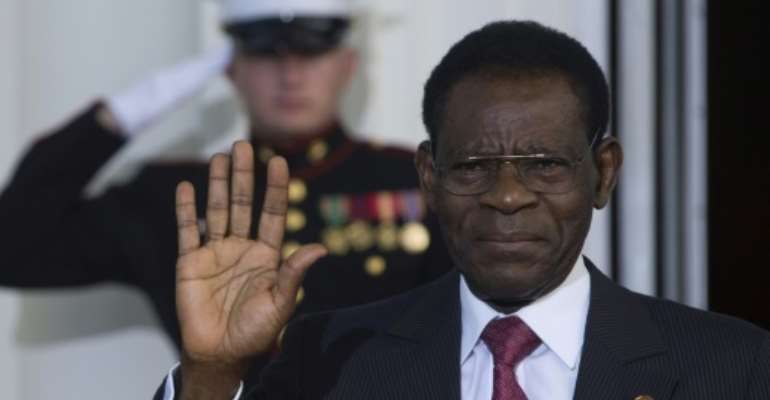 Obiang Nguema will celebrate forty years in office on Saturday, highlighting his status as Africa's longest-serving head of state since he seized power in a 1979 coup. By Brendan SMIALOWSKI (AFP/File)

Obiang Nguema will celebrate forty years in office on Saturday, highlighting his status as Africa's longest-serving head of state since he seized power in a 1979 coup.

A survivor of multiple coup bids and assassination attempts, the Equatorial Guinea leader has cracked down ruthlessly at home on foes and suspected plotters in the former Spanish colony.

In a communique on Friday, the Central African country's main opposition party, the Citizens for Innovation (CI) called for travel and visa bans on members of the government and the parliament.

The CI party was outlawed by authorities in February 2018 though it had previously won seats in legislative and municipal elections.

Twenty-one CI members, including the party's sole member of parliament, were sentenced to 30 years' jail for "sedition, public disorder, attacks on authority and serious bodily harm".

The party on Friday called on "governments of the world to demand the president of the republic and his government" grant the CI the seats it had won.

In his most recent reelection, in 2016, Obiang Nguema won more than 90 percent of the vote. But opposition groups said the election was flawed.

In a report on Friday, Amnesty International called on the government to end what the rights group called decades of abuses, including torture, arbitrary detentions and unlawful killings.

"Equatorial Guineans who turn 40 this year were born, and grew up, in a country where human rights have been constantly and systematically violated. For too long, people have lived in a climate of fear because of impunity over human rights violations," the rights group said.

Despite pressure from rights groups, critics say there are few signs that Equatorial Guinea will open up.

In December 2017, the government reported thwarting a coup allegedly orchestrated by foreign exiles.

In June this year, a court handed down sentences of up to 96 years to more than 130 people convicted of being involved.

Obiang Nguema is believed to be preparing his son, Teodorin, to succeed him as president.

The tiny West African nation is one of the continent's top petroleum producers and has a population of just 1.2 million.

Equatorial Guinea struck oil in 1995 and that has helped give the country one of the world's highest GDP per capita ratios, although rights groups point out that most Equatorial Guineans live in squalor.

The country is regularly cited by NGOs as one of the most corrupt in the world.

It ranks 141st out of 189 countries on the UN's 2018 Human Development Index, and 172nd out of 180 on Transparency International's Corruption Perceptions Index.