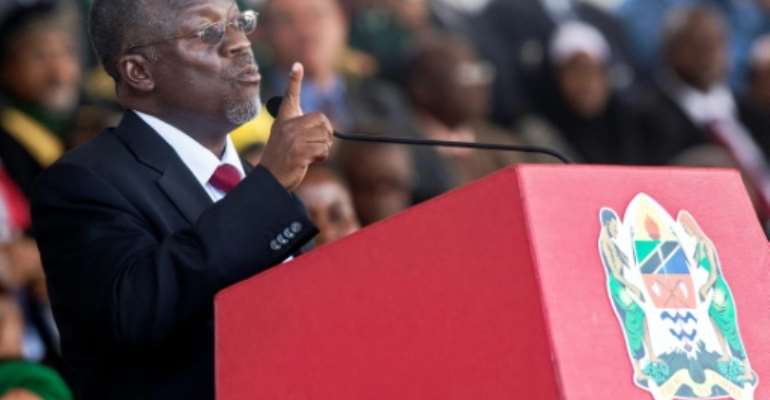 Tanzania's Magufuli came to power as a corruption-fighting

Tanzanian authorities Friday charged a respected journalist and government critic with sedition under cybercrime laws, in a case critics say is another attack on press freedom under President John Magufuli.

Erick Kabendera, whose arrest Monday night in front of his wife at their Dar es Salaam home sparked outrage, has been accused of publishing "false and seditious" information, his legal team said.

Kabendera, a reporter for local and international press outlets known for his unflinching coverage of Magufuli's administration, was initially detained for questioning over his citizenship.

But those charges were dropped and replaced with offences under the Cybercrimes Act, legislation press freedom advocates say has been wielded by Magufuli to silence critics.

"He is now charged with cybercrimes for publishing false and seditious information," a member of his defence team, Shilinde Swedy, told AFP.

"The Immigration Service has finished with Kabendera. There is no problem with his nationality. Now, there are these cybercrime charges."

Tanzanian authorities have repeatedly questioned Kabendera, and his mother, over their citizenship status, a tactic rights groups say is used to cow critics into silence.

Kabendera had written about being stalked and harassed in the years since Magufuli's election in 2015.

Reporters Without Borders (RSF) -- which has labelled Magufuli a "press freedom predator" -- has joined a chorus of local and international rights groups calling for Kabendera's immediate release.

Since being elected, Magufuli has shut down newspapers, banned opposition rallies, switched off live broadcasts of parliamentary sessions and used the cybercrimes law to jail critics.

Kabendera is not the first to be accused with sedition under these laws, with journalists charged under the act and newspapers shuttered.

Azory Gwanda, a Tanzanian journalist and government critic who disappeared in 2017, has never been found.

Kabendera's whereabouts were not known for hours after his arrest by six men claiming to be police. The authorities later held a press conference to deny he'd been kidnapped.

Magufuli came to power as a corruption-fighting "man of the people" but has since been criticised for his authoritarian leadership style.