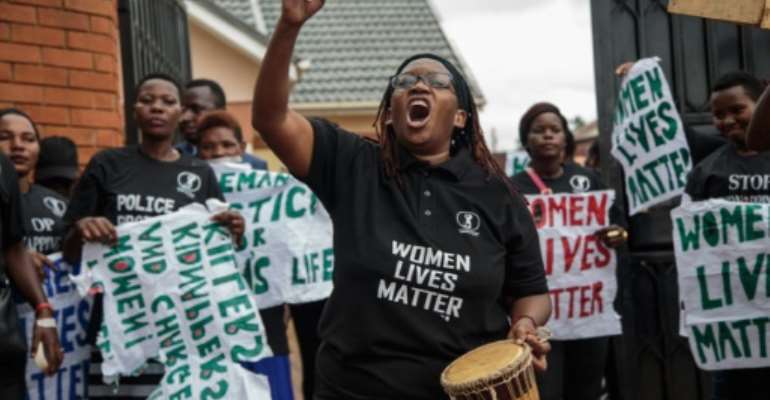 Stella Nyanzi, a university researcher and activist, was sentenced to jail for 'harassing' Uganda's long-standing ruler. By Sumy SADURNI (AFP)

A prominent Ugandan activist bared her breasts and screamed obscenities in protest Friday as a magistrate sentenced her to 18 months prison on controversial charges of 'harassing' President Yoweri Museveni.

Stella Nyanzi, a university researcher and rights activist who previously been detained for calling Museveni "a pair of buttocks", was sentenced to jail amid chaotic scenes at a Kampala courtroom.

The outspoken Museveni critic was found guilty Thursday of cyber harassment of the head of state, a verdict condemned by international rights groups and the Ugandan opposition.

She will serve nine months, having already spent another nine behind bars since being arrested in November 2018 over a Facebook post prosecutors described as a "brutish attack on the person of the President and his late mother".

Nyanzi, who appeared via video link, raised her middle fingers and yelled profanities in defiance as she was sentenced, before flashing her breasts as her supporters whooped and cheered.

A plastic bottle was hurled at the magistrate as police tried to restore order.

"Dr. Stella was very upset that she was not allowed to appear in court physically and instead appeared by video link," her lawyer, Isaac Semakadde, told AFP on Friday.

"There has been lack of transparency in this trial."

A second charge of "offensive communication" was dropped against Nyanzi, who has vowed not to relent in her barbed criticism of Uganda's long-serving ruler.

"I planned to offend Yoweri Museveni Kaguta, because he has offended us for 30 plus years," she told the courtroom Thursday before being found guilty.

"We are tired of a dictatorship."

A research associate at Kampala's prestigious Makerere University, Nyanzi holds a doctorate on sexuality in Africa and has defended her visceral attacks against Museveni and his family.

In 2017, she told AFP that "so-called vulgar words are sometimes the best way to get your message across".

The remarks that led to her jailing including a wish that Museveni's mother's birth canal had killed her unborn fetus.

"Burn you up as badly as you have corroded all morality and professionalism out of our public institutions in Uganda," she had written on Facebook.

She has also hit out at the president's wife Janet Museveni, who is Uganda's education minister, accusing her of abandoning a campaign promise of free sanitary towels in schools.

Amnesty International said Nyanzi had been persecuted "solely for her creative flair of using metaphors" and use of language some may consider offensive.

"The mere fact that forms of expression are considered insulting to a public figure is not sufficient ground to penalise anyone," Amnesty's international director for East Africa, Joan Nyanyuki, said in a statement Friday.

"The same courts which have... defended and shielded the champions of these ills have no moral authority to talk about morals," he posted on his Twitter account on Thursday.

Earlier this year Uganda's Supreme Court upheld a decision to remove an age cap of 75 for presidential contenders, paving the way for Museveni -- who has ruled since 1986 -- to run again.