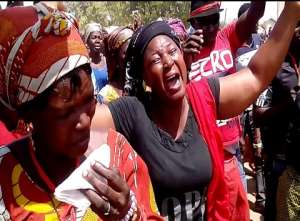 Amasaman a suburb of Ga West Municipal District, a district in the Greater Accra Region of Ghana is in tension as angry protesters mostly women clad in red have blocked some of the major roads in the community.

Some of the traders whose structures were demolished were seen carrying their foodstuff in protest of what some believe to be a ‘political move’ demolition structures.

Their protests according to reports is to register their displeasure over the local assembly’s decision to destroy some parts of the market structures.

Some residents told reporters that there was total chaos in the area.

One victim who’s shop was razed down in the market, explained that the demolition excercise was started by the Police at dawn today.

She added that the Police were not only armed but also came along with their wild dogs to carry out the demolition excercise.

Some of the victims claimed that the demolition excercise was undertaken without prior notice.

“This dawn in the market we we saw that Police with guns and some holding Guns arrived and all of a sudden began demolishing some of our structures without any explanation.”

“I sell at a spot on the shoulder of the road, and we were given a new spot, I managed to get funds totalling 500 cedis to buy cement to fix my place only for the police to bring down my structure. I don’t understand the reason behind it… We are all Ghanaians, some are NDC members, others are NPP, so why do this?”

Police officers numbering about 30 have reportedly arrived at the scene after the traders blocked the road.