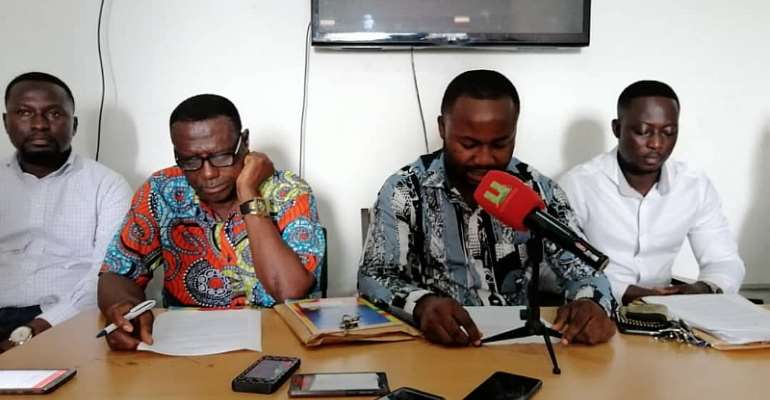 The Majority Leader and Minister of Parliamentary Affairs, Osei Kyei Mensah Bonsu, has denied assertions attributed to him by online news portal, Ghanaweb.com in a report headlined: “$200 Million Chamber – I won't descend into gutters with mad Ghanaians.”

According to him, the words attributed to him by the news portal on July 22, 2019 are not only spliced, but manufactured to create disaffection for him, accusing “Ghanaweb.com” of engaging in the enterprise of hatemongering.

“You misquote people, [and] create tension with the ultimate aim of causing disaffection for the Hon Majority Leader,” Special Assistant, Maxwell Ofosu Boakye stated at a press conference on Thursday, August 1, 2019.

He explained that the Majority Leader, who is also the Member of Parliament for Suame Constituency, had granted interview with a Kumasi-based radio station, Nhyira Fm during which he sought to explain the proposed building of a new parliamentary chamber.

According to Maxwell, the MP in an answer to the host asserted that many people did not understand his position on the matter when the issue came out, hence the insult on his person.

“The host then asked if he had been affected by the bashing and insults rained on him (Kyei Mensah)” for which the Majority Leader answered in negation, quoting Prof Busia as saying: “In Africa, if you want to be a successful politician, you need to have a big belly to accommodate all issues…”

The MP’s Special Assistant, who is the Presiding Member of Suame Municipal Assembly, indicated that Mr Kyei Mensah Bonsu again referred to Prof P A V Ansah's admonishment for anyone not to descend into gutter with persons engaging character assassination in response to political opponents who thought they had got “an opportune moment to crush him.”

For Maxwell, it is not the character of Mr Kyei Mensah Bonsu to insult and denigrate people, and that the Ghanaweb.com reportage was merely a fabrication and misquotation done deliberately to impugn his integrity.

“Politics of insult and disrespect have never been part of the Hon Majority Leader. It is only in the wildest imagination of Ghanaweb.com and mynewsGh.com to think that the Majority Leader will go on such trajectory,” he concluded.