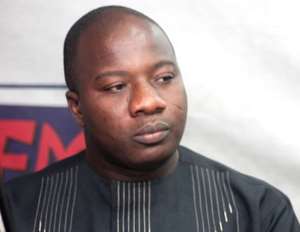 The trial of National Democratic Congress (NDC) Member of Parliament (MP) for Bawku Central, Mahama Ayariga, has been put on hold by an Accra High Court.

The decision of the court, presided over by Justice Afia Serwaa Asare Botwe, is to wait on the outcome of a suit at the Supreme Court challenging the capacity of Martin A.B.K. Amidu as the Special Prosecutor.

According to the judge, the matter was before the highest court of the land and she would not be drawn into commenting on it when the court had not yet given its decision.

This, she said, constituted an exceptional circumstance for which she would stay her proceedings until the matter is decided on.

Mr. Ayariga and six other current and former officials of the Bawku Municipal Assembly were hauled before an Accra High Court by the Special Prosecutor for offences relating to the purchase of an ambulance.

His lawyers filed an application to strike out the charge sheet on the grounds that Mr. Amidu, who signed it, is not qualified to occupy the Office of the Special Prosecutor due to his age.

The application was dismissed by the trial court on the grounds that Mr. Amidu was duly sworn in by the President as the Special Prosecutor and he would continue to remain at post until the Supreme Court decides otherwise.

The NDC MP had tried but failed to use parliamentary privileges (Article 118) which, according to him, does not allow him to be dragged to court while on parliamentary duty.

He then went to the Court of Appeal to stop the trial for the offences for which he pleaded not guilty to and was granted a GH¢100,000 self-recognizance bail.

Moving his application, his counsel, Godwin Tamakloe, told the court that their appeal raises constitutional issues which relate to the enforcement of the “supreme laws of the country.”

The Office of the Special Prosecutor represented by Michael Baafi opposed the application saying it does not raise any exceptional circumstance for which the ongoing trial should be stopped.

He said there is already a suit before the Supreme Court challenging the capacity of Mr. Amidu and should the apex court hold that Mr. Amidu is not qualified to occupy the office, it would make consequential orders which would affect the ongoing case.

Justice Asare Botwe, in her ruling, said she was staying the proceeding to avoid the situation where the court would have to end the trial when witnesses have been called, should the Supreme Court hold that Mr. Amidu is not qualified to hold office.

She said the Supreme Court is yet to reconstitute a new panel to hear the matter following the retirement of Justice (retd.) Sophia Adinyira, who was part of the previous panel.

Meanwhile, on October 23, the court will give its ruling on an application urging it to strike the charge against a businessman Kenderick Akwasi Marfo who has been charged by the Office of the Special Prosecutor for allegedly aiding the NDC MP in using his public office for private gain.