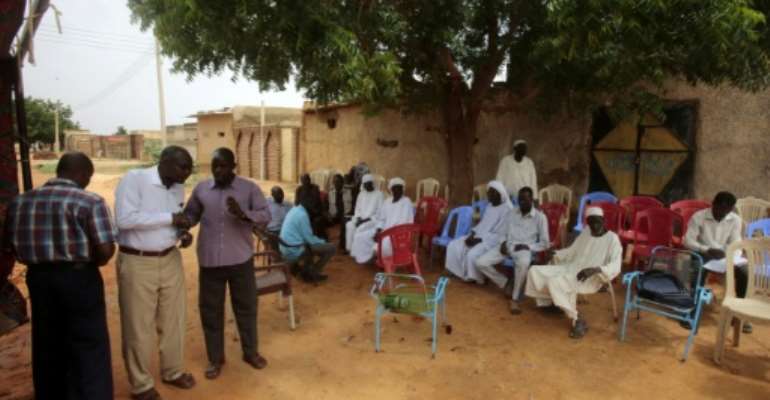 People gather to offer condolences in front of the family home of a slain Sudanese school pupil in the central city of Al-Obeid. By ASHRAF SHAZLY (AFP)

Sudanese school pupil Abdallah Adam's family hit out in anger when a delegation from the ruling military council came to offer condolences after he was shot dead by security forces.

"We told them we would not accept any government official," said 23-year-old relative Bushri Adam after Monday's tragedy in Al-Obeid.

Four high school pupils and two other protesters were shot dead during a rally in the central city against growing bread and fuel shortages.

Another four demonstrators were shot dead on Thursday in the city of Omdurman, twin city of the capital Khartoum, in a protest over the Al-Obeid killings, medics said.

The latest killings came as protest leaders and the generals who took power after longtime president Omar al-Bashir's ouster in April resumed talks on a transition to civilian rule.

In the narrow dirt lane outside Adam's home, mourners packed a small tent filled with rows of white plastic chairs splattered with mud from heavy rains.

"Death is a right, but the painful thing is humiliation," said Adam's father Ismail, hiding his tear-stained face with a handkerchief.

The deaths have sparked outrage across the country and brought international condemnation.

On Wednesday, after having been rebuffed from the boy's home, a top general accused members of the feared paramilitary Rapid Support Forces of opening fire on the student rally.

The rally was initially stopped with batons by a group of RSF forces guarding a nearby bank, said Jamal Omar, who heads the ruling military council's security committee.

But when some students threw stones, members of the RSF acted in their "individual capacity" and opened fire on the crowd.

"We have identified those who fired live ammunition that led to the killing of the six," he said.

On Friday, the military council said nine RSF paramilitaries had been arrested for the killings in Al-Obeid.

Medic Mohammed Idris, a friend of Adam's, told AFP that a bullet had hit the boy "under his right eye and exited out of his shattered skull".

"We did not get a full report after his autopsy, only a death certificate for his burial," he said.

On the walls around Al-Obeid's modest hospital, a portrait has been sprayed of 17-year-old Ahmed Abdelwahab along with his nickname "Kaka", in tribute to his favourite Brazilian footballer.

"Kaka was active in the neighbourhood and the school," relative Rashid Bakhit told AFP, adding that the boy "participated in the protests even though his family had no political leanings".

The bullet that killed him pierced the right side of his abdomen and exited through the left, he said.

"Kaka's family and colleagues are devastated," he said.

Doctor Amer al-Tayeb received the bodies of the four pupils, along with 35 others wounded during the march.

"All of them were shot with live bullets, some in the head and others in the chest and legs."

"Blood for blood, we don't want compensation," chanted women and men as they marched in Al-Obeid on Wednesday. 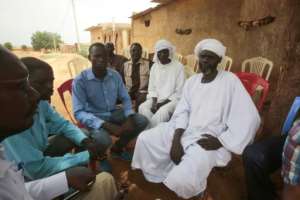 Many carried Sudanese flags and some held photographs of those killed as they gathered downtown after marching through parts of the city.

The 18-year-old said he was marching with his classmates when they were met with a "hail of bullets", one of which hit him in the thigh.

Standing next to him outside the hospital gates, his mother looked on, her anxiety and anger boiling.

"How can they shoot at young students doing nothing but chanting?" she asked.

In the city's citadel, a funeral tent has also been erected outside the home of 55-year-old Mohammed Suleiman -- he too was killed during Monday's march.