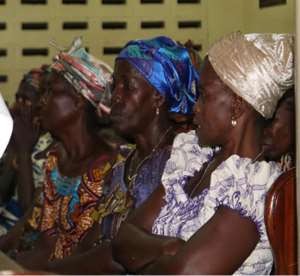 It was a difficult moment for a village called Daakye Asem to overcome an obstacle that hit them; the people were dying, others were suffering from chronic diseases whilst pregnant women were having miscarriages, whereas children were dying instantly as they are born.

Blood flowing through the streets was not enough to cry for by the people, hunger killing the sick ones could not be fathomed with how tears were flowing on the cheeks of the elderly ones. The chief and elders who thought they could solve the ungodly situation contacted the oracles, the magicians and the soothsayers but all could not hold water.

After years of suffering, disasters, and tears of unforeseen occurrences, the people of Daakye Asem had their way out. An old lady of about 120 years was finally consulted, the grey hairy quiet grandmother had their solutions. The 120-year-old woman said, ever since the newly installed chief took over the customs and tradition of the village had been stopped for modernizations reasons which has aggravated the gods to strike the village with their wrath.

The rituals were performed and the customs and tradition was followed, Daakye ASEM Village is now safe from their predicaments. Currently, civilization has taken away the pride of Africa. The era where the young ones give the aged the opportunity to sit, greet, and assist them in whatever they do is no more seen because old age is seen as witchcraft. The aged are not respected and not treated right because, they have been accused by some Pastors, Prophets, and traditions.

What policies have been stipulated to fight the stigma against the aged? How many of them have been consulted pertaining to the problems we are facing as a country? Are the aged experienced alive accepted or rejected for Political reasons?

Hmmm. I strongly believe we need them seriously without consideration with reference to the situation in Daakye Asem.

Ghana currently has 57% of the total population as youth, 43% of the population is Aged. The aged are made up of the sick, the rejected ones. The widows and less privileged ones but all these poor aged irrespective of their caliber, have something unique to offer Ghanaians and when they are consulted, the country could benefit enough from them since they also play important role in the building of the nation since they are the right source of oral history. Caring for the ages should be a policy for successive governments to recon.

Moving forward as a country, nation-building should not be left only to the government but Civil Society Organizations equally have a role to play. When all hope seems to have been lost for the aged, there come some very young and vibrant individuals in the persons of Evelyn A. Boateng, Christine Amuzu and Nana A. Brobey who came together to create a platform to help the aged called Sisters Keepers Association. A non-governmental organization with the quest to help the nation-building. They are doing their possible best with their branches in the United Kingdom, United State of America, Germany, Ghana and still counting by Supporting and Empowering Women, Helping the Elderly (AGED) within our communities and inspiring them to become independent. Through philanthropic activities, Sisters Keepers Association ensure Equality, Individual Rights and Freedom for all.

Sister Keepers Association strives to make the aged feel comfortable in the society, help the needy and inspire their vision. Since its formation has been able to; Dine with the Aged at Dansoman, Organized an Awareness talk at Osu Presby, Donated to the Eye of the Lord- Nsawam and countless programs for the Orphanage homes. All these beneficiaries enjoyed the best of their lives as their faces showed; joy, happiness, love and being special in the society because at first, they felt stigmatized.

The President, Miss Evelyn A. Boateng in an interview said people with Alzheimers and Dementia must be given the necessary attention to enhance their sense of belongingness and desist from stigmatization.

As we go forward as a country, similar initiatives and policies must be emulated by the government to help the less privileged ones. Sister Keepers Association has come to stay and we need the support of Ghanaians them to forge ahead and I believe if we consult them (Aged) as the people of Daakye Asem did, the country will be better. Kudos to Sisters Keepers Association for such a yeoman job done.