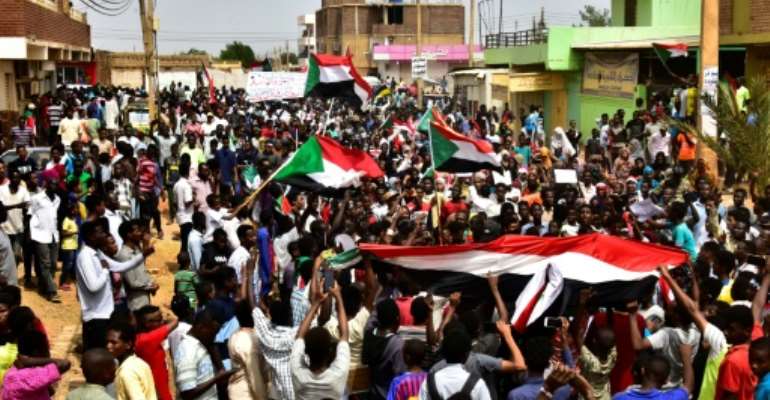 Sudanese protesters march during a demonstration in the capital Khartoum on August 1, 2019. By Ahmed Mustafa (AFP)

Four protesters were shot dead at a rally in the Sudanese city of Omdurman Thursday, medics said, as protest leaders and ruling generals started talks to thrash out remaining issues on transitioning to civilian rule.

The gunfire occurred as thousands of demonstrators took to the streets in several cities across Sudan, including the capital Khartoum and its twin city Omdurman, to demonstrate against the killing of schoolchildren at a protest earlier this week.

"Four protesters have been killed by live ammunition and several wounded at a rally in Omdurman," the doctors' committee linked to Sudan's protest movement said in a statement.

On Monday, four secondary school students were among six killed at a rally in Al-Obeid, the capital of North Kordofan in central Sudan.

Protest leaders had called for a million-strong march across the country on Thursday to "seek justice for the victims" and condemn Monday's killings, which they too have blamed on the RSF.

"Where is the investigation committee?" chanted protesters as they marched in the Burri and Bahri districts of the capital, sites of regular protests since unrest first erupted in December against the regime of ousted president Omar al-Bashir. 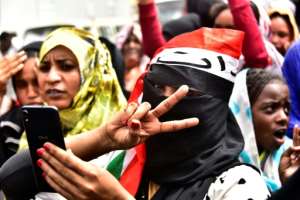 Protest leaders called for a "million-strong" march across the country to condemn the killing of four students, which they blamed on paramilitaries. By Ahmed Mustafa (AFP)

Many in Khartoum carried Sudanese flags along with photographs of some of those people killed in months of protests -- initially against Bashir, and subsequently against the military council that seized power from the autocrat in April.

Protesters also rallied once more in Al-Obeid, along with the Red Sea coastal city of Port Sudan, in White Nile state and in the central city of Madani, witnesses said.

Omar, a member of Sudan's ruling military council, accused elements of the RSF of opening fire at Monday's Al-Obeid rally.

The rally was initially stopped with batons by a group of RSF forces guarding a nearby bank, the general told reporters during a visit to the city late Wednesday, according to Cairo-based AL-Ghad television network.

"This made some members of the force act in their individual capacity to open fire on protesters. We have identified those who fired live ammunition that led to the killing of the six," he said.

A doctor at Al-Obeid hospital who received the casualties on Monday told AFP that four of those killed were students.

The Al-Obeid rally was against a growing shortage of bread and fuel, residents and witnesses told AFP this week.

It was the sudden tripling of bread prices in December that sparked the mushrooming protests which led to the toppling of Bashir. 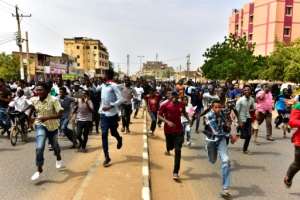 Doctors linked to the protest movement say more than 250 people have been killed in protest-related violence since December. By Ahmed Mustafa (AFP)

Doctors linked to the Alliance for Freedom and Change protest umbrella have said more than 250 people have been killed in protest-related violence since December.

The main demand of demonstrators has been to establish civilian rule, but talks with the generals have been suspended several times amid regular violence which peaked on June 3 when armed men broke up a weeks-long protest camp.

At least 127 people were killed that day alone, according to the protest-linked doctors.

Officials have given a much lower death toll.

The talks resumed following intense mediation by African Union and Ethiopian diplomats, and the two sides inked a power-sharing deal on July 17 that aims to form a joint civilian-military governing body.

That body would then establish a transitional civilian administration for a period of just over three years, after which elections would be held. 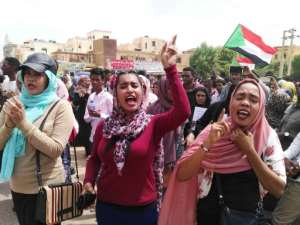 Demonstrators marched in Khartoum on Thursday to "seek justice" for the slain students and others killed in protest-linked violence. By Ebrahim HAMID (AFP)

The talks were suspended again following the killings in Al-Obeid.

Now that they have resumed, the two sides are expected to touch on several key issues.

The remaining obstacles concern the powers of the proposed joint civilian-military ruling body, the deployment of security forces and immunity for generals over protest-related violence.