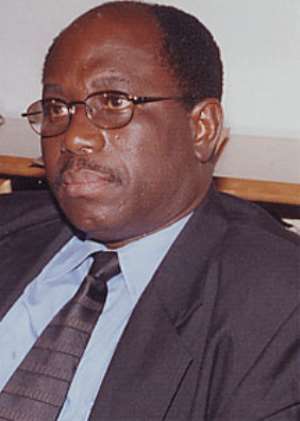 Accra, Feb. 9, GNA - Mr Raymond Archer, Editor-in-Chief of "The Enquirer" newspaper, on Thursday told the Investigative Panel of the Commission on Human Rights and Administrative Justice (CHRAJ) that the business relationship between Dr Richard Anane, Minister of Road Transport and Mrs Alexandria Anane, turned into a sexual affair that virtually collapsed the company the Lady worked for. Mr Archer told the panel that as a result of the sexual relationship between them, the Lady's foreign directors withdrew their shareholdings from the company and that virtually collapsed it. Led in evidence by Dr Bondzie-Simpson, counsel for CHRAJ, Mr Archer told the Panel that the Minister met the Lady, a businesswoman, then Alexandria O'Brien, during a visit to the United States. Witness said the two of them entered into a Memorandum of Understanding (MOU) to undertake a World Health Monitor Programme in Ghana. After signing the MOU on the project, which was aimed at helping to fight the HIV/AIDS pandemic in the country, the two turned the business relationship into a love affair. This, Mr Archer said, discouraged the directors of Mrs Anane's company abroad, who subsequently withdrew their shareholdings in the project, thus virtually collapsing the entire project. Mr Archer told the Panel that the sexual relationship between Dr Anane and Mrs Anane resulted in the birth of a child called Nicholas Anane. Asked who were referred to in the Chronicle's report titled: "Anane's Kangaroo Sponsors", Mr Archer named them as Mr Collins Kwaku Bonsu, Captain Kwakwa, Obed, and Mr Ebenezer Tetteh Quaynor, among others. Asked whether he could interview those sponsors, Mr Archer told the Panel that he tried in vain to reach them. On another story in the May 30-June 1 issue of the "Enquirer" titled: "Who is going to pay - Friends? Mr Archer told the Commission that Dr Anane took up an insurance policy worth one million dollars with Mrs Alexandria Anane and Nicholas Anane as the beneficiaries. Asked by CHRAJ's counsel as to his concerns about the Minister's undertaking the policy, Mr Archer said considering his net salary of three million cedis a month, he wondered how Dr Anane was going to fund the policy while in public office. Asked by the Commission's counsel whether he was able to find out who were Dr Anane's friends captured in the headline of his story, Mr Archer replied in the negative. Asked under cross-examination by Mr Acquah-Sampson, counsel for Dr Anane, whether "Ghanaian Chronicle" was interested in filing stories about Dr Anane at the time he was working with the paper, Mr Archer replied in the affirmative. Mr Archer said as a Journalist, he was personally interested in stories about the Minister. Asked by Mr Acquah-Sampson whether through his newspaper's publications about Dr Anane, he had appeared at any forum with complaints about the Minister, Mr Archer said he petitioned Parliament. Asked about Parliament's reaction to his petition, Mr Archer stated that the august House told him that he would hear from members in due course, but that was the end. He told the Panel that since he was before it as a witness, "I have told CHRAJ what I know". The three-member Panel has Miss Anna Bossman, Acting Commissioner of CHRAJ as chairperson, while Dr Anane is being represented by a team of six lawyers led by Mr Jacob Acquah-Sampson. Proceedings on the matter have been adjourned to Monday, February 13 for Mr Archer to continue with his evidence. 09 Feb. 06