Is Universal Health Coverage An Opportunity To End AIDS And TB? 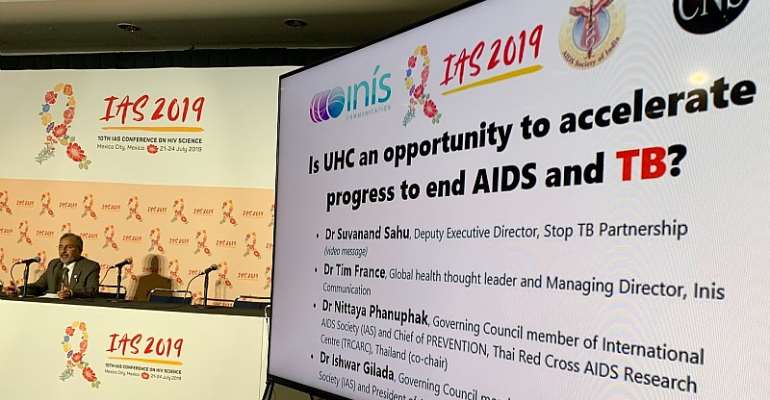 At the United Nations General Assembly in September 2019, a special United Nations High Level Meeting (UNHLM) will be held on Universal Health Coverage (UHC). 193 countries have promised to deliver on UHC by 2030 by committing to Sustainable Development Goals (SDGs).

But will push on UHC alone deliver on the promise of health for all where ‘no one is left behind’? And will UHC complement the efforts to eliminate tuberculosis (TB), AIDS, malaria and improve outcomes of other disease-specific programmes?

Dr Suvanand Sahu, Deputy Executive Director of Stop TB Partnership, said at the 10th IAS Conference on HIV Science (IAS 2019): “We believe that Universal Health Coverage (UHC) is needed to end TB epidemic. Four million people who have TB, are missing from care every year. UHC is the way where these missing people with TB, can be diagnosed and put on treatment. We also believe that UHC is a mechanism to find everybody who needs care in a timely manner and getting all the resources to do it in a way that it will not lead to catastrophic out of pocket expenditure.”

Dr Sahu shared example of Japan which was a co-facilitator of UNHLM on TB last year. “Japan has made a strong case for UHC, by linking TB and UHC together. When Japan brought down rates of TB it was very much due to the approach of UHC. We must also see how TB is seen as a pathfinder for UHC in some other countries.”

“In some ways ending TB and AIDS and achieving Universal Health Coverage are essentially the same thing. After 20 years of unprecedented investment, attention, and commitment to tackling AIDS, TB and malaria, one thing is clear: we have probably achieved what we can achieve by using the current approaches. More business as usual is unlikely to take us further towards ending these epidemics. We need to clearly do something differently to move the dial in any meaningful way” said Dr Tim France, global health thought leader and Managing Director of Inis Communication. Dr France was speaking (via video) at the 10th IAS Conference on HIV Science (IAS 2019) in Mexico.

WHAT DO WE NEED TO DO DIFFERENTLY FOR ‘HEALTH FOR ALL’?

“I would argue that there are three things that we need to do differently to achieve that. Firstly, we need to approach health through a much more holistic model and thinking even beyond universal health coverage and not just individual diseases. In my view the best model we have currently available to us is one which is being put forward by the World Health Organization (WHO) as part of their next five-year plan” reflected Dr Tim France.

WHO’S ‘3 BILLION’ PLAN COULD BE A PLAN FOR GLOBAL HEALTH!

Dr Tim France says that UHC specifically is a limited opportunity on its own, so in order to have any real chance of success against the most pressing health issues countries, communities and individuals face, including TB and AIDS, we, need to approach health in a much broader way. “In much the same way as the ‘WHO Three Billion plan’ does, it should be a plan for global health I think and not just for WHO” said Dr France.

“I am drawn to this 3 part model of health because it reflects the realities that affects people’s health and it is about how people see their own health, not as one disease or health issue but as a complex web of factors that affect their health, well-being and vulnerability” said Dr France.

First part of “WHO Three Billion plan” refers to UHC, aiming for minimum package of services and health technologies and support the people’s need when they are accessing the health system.

Second part of the WHO plan talks about health emergencies and protecting vulnerable people who are particularly vulnerable at certain times, such as, “the current Ebola outbreak in Democratic Republic of Congo or unstable post-conflict or post-disaster situations. There are heath emergencies happening all the time in most places. For example, I am speaking from Thailand where it is rainy season. In rainy season vector-borne diseases such as dengue are at particular risk. We are also close to borders of Myanmar, Laos and Cambodia, precisely the hotspots where drug-resistant malaria is emerging right now. So, emergencies are not necessarily these large-scale public health emergencies of international concern but can be localized emergencies too” said Dr Tim France.

Third part of the WHO ‘3 Billion’ model is related to general health and well-being as opposed to addressing ill-health, addressing some of the social, environmental and commercial determinants of health. Dr France shares an example to further underline its significance: “Few months ago, Chiang Mai in northern Thailand, where I am speaking to you from, was reported to having the most intense air pollution, as anywhere in the world at the time. What is the point of having the perfect health system when citizens are exposed to such a toxic environment? Similarly, one of the biggest causes of death and injury in Thailand is road traffic collision, largely caused by lack of enforcement of laws and drunk driving. Again, what is the point of perfecting a health system and universal health coverage when thousands of people die on the roads?”

COUNTRIES MUST PRIORITISE HEALTH ISSUE TO FOCUS ON

After proposing the first global health shift on lines of ‘WHO 3 Billion’ model, Dr Tim France shares his insight on the second major global health shift: countries should be prioritising the health issue they will focus on. “This means prioritizing certain areas of research for example, so that we understand the given health issue or given health problem more, or developing specific capacities so that we know that the entire health system is working properly and delivers the services, vaccines and support that the people need” shares Dr Tim France.

“For too long, priorities have been set by combination of national health planning and international concerns, particularly in countries most dependent on international development assistance for health (which is decreasing as countries take more responsibility for domestic financing of health and taking more of a driving seat more than ever in setting priorities)” explained Dr France.

INTERNATIONAL ORGANIZATIONS MUST COLLABORATE, PARTNER AND THINK TOGETHER

“With multiple organizations and interests vying for attention and financing, to make sure their issue or focus has prominence, we have inadvertently created an environment of competition among organizations. That means, we quite often do pit one disease against another: for example, AIDS against TB or cancer or diabetes or vaccine-preventable diseases in children” shared Dr Tim France.

After suggesting two major global health shifts to deliver on health for all (first shift of approaching health on lines of ‘WHO three billion’ and second shift of countries setting their health priorities), Dr France shared the third major change: international organizations must collaborate, partner and think together in close partnership.

Dr France hinted towards a new global initiative originally requested by the governments of Norway, Germany and Ghana, that will be revealed at the upcoming UNHLM on UHC in September 2019: “Global Action Plan for Healthy Lives and Well Being for All”, which seeks to improve the way and force these organizations to work more closely together.

THAILAND AND INDIA PROGRESSING ON UHC

Thailand's progress on UHC as well as addressing HIV is seen as a model for other communicable and non-communicable diseases too, said Dr Nittaya Phanuphak, Governing Council member of International AIDS Society (IAS) and Chief of PREVENTION, Thai Red Cross AIDS Research Centre. In 2000, Thailand piloted roll-out of antiretroviral therapy (ART) for people living with HIV and by 2006, ART was included in UHC for all people who need it. This year Pre-Exposure Prophylaxis (PrEP) has been included in Thai UHC, roll-out of which will begin later in October this year.

"Thai researchers, policy makers, health economists and others, have moved forward HIV to become something beyond just treatment or disease but also about prevention and well being" emphasized Dr Nittaya Phanuphak.

Mahatma Gandhi had shared a talisman: "I will give you a talisman. Whenever you are in doubt, or when the self becomes too much with you, apply the following test. Recall the face of the poorest and the weakest man [woman] whom you may have seen, and ask yourself, if the step you contemplate is going to be of any use to him [her]." If all decisions related to public health and sustainable development in general, are made using this Gandhi's talisman, probably we may see a positive impact towards delivering on UHC and other goals and targets of Agenda 2030.