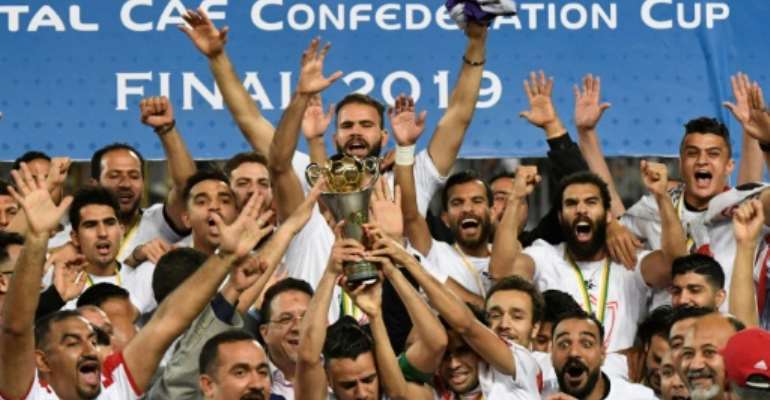 Egyptian club Zamalek celebrate winning the 2019 CAF Confederation Cup. They will not defend the title having qualified for the richer CAF Champions League. By Khaled DESOUKI (AFP)

CS Sfaxien of Tunisia are the star attraction in a 2019/2020 CAF Confederation Cup draw that includes only three clubs who have won African titles.

The club from Mediterranean industrial city Sfax received a bye into the round of 32, where they will face Paradou AC of Algeria or CI Kamsar of Guinea during September.

Paradou are the likelier winners of the preliminary tie next month, but as newcomers to CAF football they may lack the experience to eliminate Sfaxien over two legs.

The only local-based footballer in the Algeria squad that won the Africa Cup of Nations this month was Paradou midfielder Hicham Boudaoui, at 19 the youngest in the national squad.

Sfaxien have won the African version of the UEFA Europa League a record three times, beating big-name opponents in each final.

They overcame Al Merrikh of Sudan 5-2 overall in 2007, edged Etoile Sahel of Tunisia on away goals a year later and TP Mazembe of the Democratic Republic of Congo 3-2 in 2013.

But, in a rare collapse by a Tunisian club in a CAF competition, they crashed 3-0 away and were eliminated.

Krol has since departed, leaving Montenegrin Nebojsa Jovovic with the challenge of bringing the Confederation Cup trophy back to eastern Tunisia.

Sfaxien are the lone entrant among 53 challenging for a $1.25 million (1.12 mn euros) first prize to have won the Confederation Cup, which was introduced in 2004.

The other two CAF title winners are Enugu Rangers of Nigeria and Daring Club Motema Pembe of DR Congo.

Both lifted the now defunct African Cup Winners Cup: Enugu in 1977 and Motema Pembe in 1994.

Enugu received a bye to the round of 32 where they await the winners between AS Pelican of Gabon and AS Maniema Union of DR Congo.

Mogadishu City Club will become the first Somali side to play in the Confederation Cup when they meet Malindi of Zanzibar, leaving Cape Verde and Eritrea as the only nations never to enter.

But the chances of Mogadishu winning the tie will be lessened by having to play their home match outside the country for security reasons with Djibouti City the probable venue.