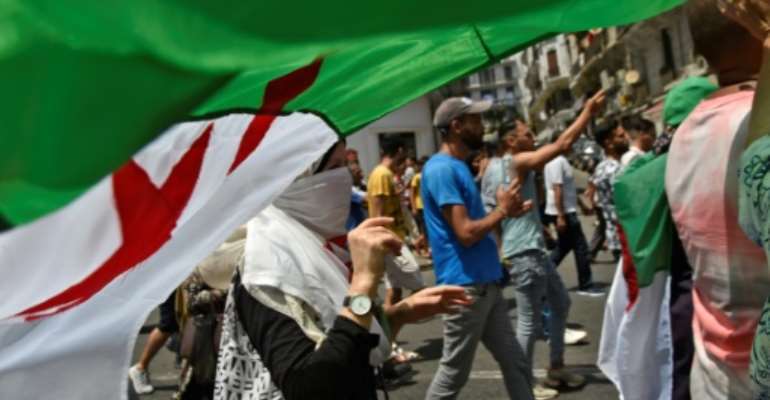 Algerian protesters demonstrate in Algiers calling for an overhaul of the country's political system. By RYAD KRAMDI (AFP)

Algeria's powerful army chief Tuesday ruled out accepting any pre-conditions to launching talks to end the country's political crisis, saying there was "no more time to lose".

Algerians have taken to the streets every Tuesday and Friday since February demanding political change, leading to the ouster of veteran president Abdelaziz Bouteflika on April 2.

But efforts to move towards new presidential elections have bogged down as protesters have continued to demand the departure of key regime figures and an overhaul of the North African country's political system.

"There is no more time to lose," said army chief Ahmed Gaid Salah during a speech to a ceremony, which was broadcast on the television, slamming what he called "pre-conditions which amount to diktats".

A seven-member committee has been set up tasked by interim President Abdelkader Bensalah with discussing arrangements for the next election, after Bouteflika resigned following two decades in power.

But the protest movement has been calling for some measures to be taken before any dialogue can start including the release of people arrested in connection with the demonstrations.

The protesters also want fewer police to be deployed during the weekly demonstrations, and have called for the lifting of blockades put in place every Friday to impede the rallies at the entrances to Algiers.

Bensalah had said he was open to "studying" the demands.

But Salah on Tuesday slammed "poisonous ideas... notably the call to widen the number of detainees, wrongly said to be held for their opinions" and stressed the independence of the judiciary.

The police deployment put in place "for the security of the marches was a measure taken in the interest of the people," he added, insisting the rallies must be properly organised "to avoid them being infiltrated."

An already delayed presidential election set for July 4 was postponed after the only two potential runners -- both little known -- had their candidacies rejected.