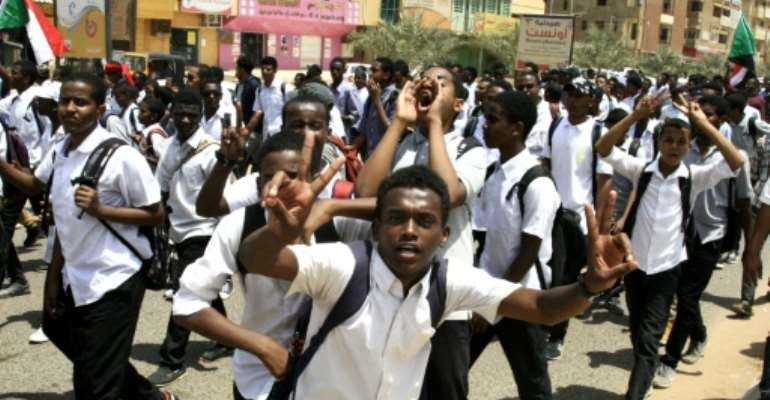 Sudanese schoolchildren took the streets of Khartoum a day after five teenagers were killed in a central town. By Ebrahim HAMID (AFP)

Sudanese protest leaders cancelled planned talks with the country's ruling generals on Tuesday as hundreds of schoolchildren demonstrated in Khartoum against the shooting dead of five pupils at a rally.

"Killing a student is killing a nation," chanted crowds of schoolchildren, dressed in their uniforms and waving Sudanese flags, in the capital's eastern district of Burri.

Sporadic protests by schoolchildren were also held in other parts of the capital.

Demonstrators accused feared paramilitaries of the Rapid Support Forces of shooting dead the five teenagers on Monday in the central town of Al-Obeid at a rally against shortages of bread and fuel.

The killings came a day before protest leaders were due to hold talks with generals on the remaining aspects of installing civilian rule after the two sides inked a power-sharing deal earlier this month.

But three protest leaders said the dialogue would not take place as planned. 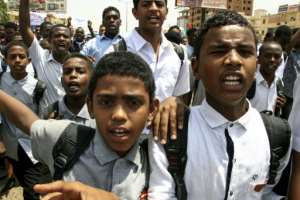 Protests by schoolchildren were held around the Sudanese capital. By Ebrahim HAMID (AFP)

"There will be no negotiations today as we are still in Al-Obeid," Taha Osman, a negotiator from the protest movement, told AFP by telephone from the town.

"There will be no negotiation today with the Transitional Military Council as our negotiating team is still in Al-Obeid and will return only tonight," a second negotiator, Satea al-Haj, said.

Another protest leader told AFP on condition of anonymity that talks would resume after "calm returns to the streets as dialogue was the only way to break the overall political impasse".

"What happened in Al-Obeid is sad. Killing peaceful civilians is an unacceptable crime that needs immediate accountability," the chairman of Sudan's ruling military council told journalists, according to state television.

The UN children's agency UNICEF called on the authorities "to investigate" the killings and hold the perpetrators accountable.

"No child should be buried in their school uniform," UNICEF said, adding that the pupils killed were between 15 and 17 years old. 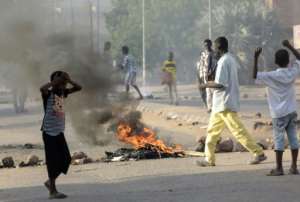 Some protest leaders have called for planned talks with Sudan's ruling generals to be postponed following the deaths of the five schoolchildren. By ASHRAF SHAZLY (AFP)

Authorities announced a night-time curfew in four towns in North Kordofan state following the deaths in Al-Obeid, as the main protest group, the Sudanese Professionals Association, called for nationwide rallies against the "massacre".

All schools in the state have been told to suspend classes.

"The Janjaweed forces and some snipers, without any mercy, confronted school students with live ammunition," the SPA said, referring to the RSF which has its origins in Arab militias that were originally deployed to suppress an ethnic minority rebellion that erupted in Sudan's western region of Darfur in 2003.

The SPA said more than 60 people were wounded in Al-Obeid.

Doctors linked to the protest movement say that more than 250 people have been killed nationwide in protest-related violence since December when demonstrations first erupted against now ousted president Omar al-Bashir.

Residents of Al-Obeid said the schoolchildren's rally had been over shortages of bread and fuel in the town.

It was a sudden tripling of bread prices that was the spark for the mushrooming protests that brought an end to Bashir's three decades of iron-fisted rule.

The teenagers' deaths had prompted calls for Tuesday's planned talks to be suspended.

"We cannot sit at the negotiating table with those allowing the killing of revolutionaries," Siddig Youssef, a prominent protest leader, said in a statement. 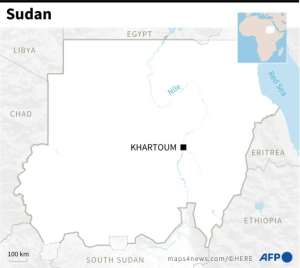 Map locating Al-Obeid where 5 people were shot dead Monday, during a demonstration, according to a doctors committee linked to the protest movement.. By (AFP)

Tuesday's talks were to cover issues including the powers of the joint civilian-military ruling body, the deployment of security forces and immunity for generals over protest-related violence, according to protest leaders.

The power-sharing deal agreed on July 17 provided for the establishment of a new governing body of six civilians and five generals.

But the publication on Saturday of the findings of an investigation commissioned by the military into the deadly dispersal of a Khartoum protest camp in June has triggered angry demonstrations.

Shortly before dawn on June 3, gunmen in military fatigues raided the site of the weeks-long sit-in outside army headquarters, shooting and beating protesters.

Protest leaders have rejected the findings of a joint investigation by prosecutors and the ruling military council which concluded that just 17 people were killed on June 3, with a total of 87 deaths between that day and June 10.