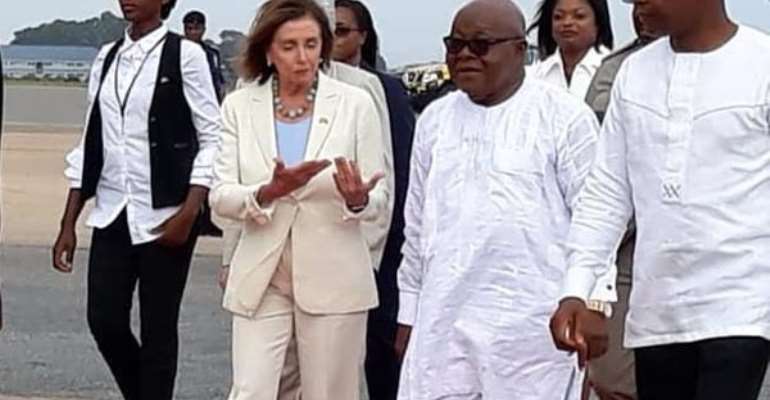 The Speaker of the United States (US) Congress lower chamber, the House of Representatives, Nancy Patricia Pelosi, arrived in the country yesterday.

She arrived with a high-powered congressional delegation on an official visit to the country.

She is expected to address Ghana's Parliament on Wednesday, July 31, after bilateral talks with President Akufo-Addo at the Jubilee House.

The US House of Representatives' Speaker is leading a delegation comprising members of the Congressional Black Caucus as part of the “Year of Return” celebrations in Ghana.

The 40-member delegation as part of the visit will take a tour of some of Ghana's historic slave trading ports, including Elmina and Cape Coast Dungeons and the Slave Heritage site at Assin Manso which houses the remains of slave ancestors brought down from the US, including a former US Naval officer, Samuel Carson, among others.

Pelosi is a Democratic Party member in the US and is the first woman Speaker of the House. She became the Speaker in 2018 after the mid-term elections in the US when the GOP lost the House majority.

That made her the highest-ranking elected woman in the United States' history.

She represents California's 12th congressional district which consists of four-fifth of the city and county of San Francisco.

Ahead of her historic visit to Ghana, the Speaker met with Ghana's Ambassador to the United States, Dr. Barfuor Adjei-Barwuah, at her office in Washington D.C. on Thursday, July 25, 2019.

The Speaker extended an invitation to Ghana's ambassador to review key matters regarding her visit.