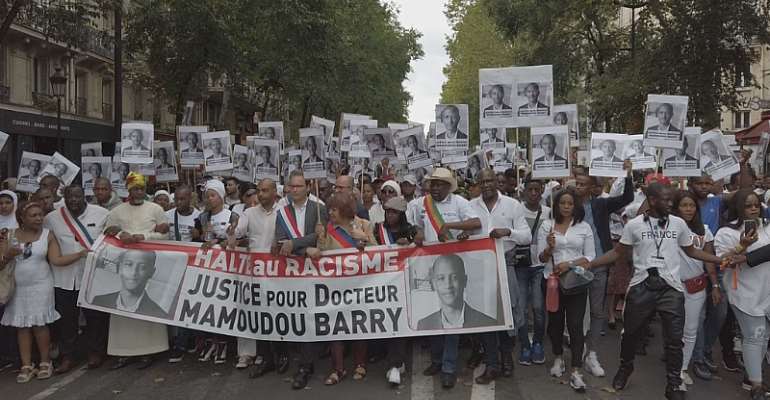 Hundreds of people gathered in the cities of Conakry, Rouen and Paris over the weekend to protest racist violence after a Guinean academic, Mamoudou Barry, was murdered in Normandy last Friday by a man who had shouted racist insults. The suspect is said to be suffering from a mental illness.

Demonstrators in Paris marched on Saturday under the slogan No to Racism and chanting Never Again.

Many carried banners that read "Justice for Mamoudou Barry," while others held signs bearing the photograph of the young 31-year-old researcher, who died after being beaten to death in Rouen in northern France.

Under a cloudy sky, many in the crowd struggled to contain their anger.

"What did he do wrong?" said Boubacar Telly Diallo, a 29-year-old bank manager.

"He was going home with his wife, and he was killed (...) just because he was black," he told RFI.

The Guinean academic had just completed his PhD when he was attacked by a man, described as French of Turkish origin, on Friday 19 July, who had called him a "black bastard".

Racism or act of insanity?
Barry's relatives quickly labelled the incident a racially motivated attack, however the lawyer for the suspect's father told journalists that "there was no way the young man could have attacked somebody because of their skin colour."

"He grew up in a multiracial environment with people of all backgrounds," lawyer Selcuk Demir told  French news agency AFP.

The suspect known as Damien A, aged 29, was arrested Monday, July 22nd, on suspicion of murder, and has since been transferred to a psychiatric hospital for mental health reasons.

Back at the march, few are convinced by the insanity plea.

"Even if he had a psychiatric problem, he talked to him [Mamoudou Barry] so badly, he was really violent in what he said," comments Laure Vogiel, a French woman who heads an NGO working with refugees in Paris.

The death of Mamoudou Barry has dealt a blow for Guineans in France and at home, where marches have also been held in the capital Conakry.

The academic, who taught at the Rouen-Normandie University, was admired for his work that included a recent thesis on tax and customs policies for foreign investment in francophone Africa.

Blow to Guinean pride
"I interacted with him for three years," comments student Mamoudou Barry, who bears the same name as the victim.

"To learn that he was killed in this way, and that he was the victim of racist insults, that's why I came," Barry told RFI, after travelling to Paris from Rouen where at least 1,400 people demonstrated Friday also demanding justice.

Investigators are still trying to piece together the circumstances leading up to Mamoudou Barry's death amid calls from his family and protesters for greater transparency.

"This is 2019, and something like this could happen," says Eric Koka, president of an organisation for the Guinean diaspora.

"Barry had got out of his car to ask for an explanation for why he was being insulted. Any proud Guinean would have done the same thing," Koka told RFI.

In his view, Barry's death hits at the heart of Guinea's pride.

"We were the first west-African country to become independent [in 1958], we wanted our independence. We are proud. So calling Mamoudou Barry a 'black bastard', is like insulting us all," he said.