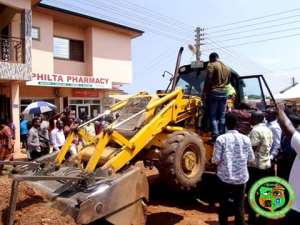 The Member of Parliament (MP) for Dome-Kwabenya Constituency, Hon. Sarah Adwoa Safo, has urged her constituents to support and cooperate with the government as it strives to bring them much needed development. She made this remark when she addressed a durbar of Chiefs and people at Dome Pillar 2 to cut sod for the construction of roads in the area.

Hon. Sarah Adwoa Safo, who is also the Minister of State in charge of Public Procurement and Deputy Majorty Leader of the Parliament of Ghana, together with the Municipal Chief Executive (MCE) for the Ga East Municipal Assembly (GEMA), Hon. Janet Tulasi Mensah and NPP Chairman for Dome-Kwabenya Constituency, Mr. Robert Osei Bonsu, on Tuesday, 23rd July, 2019, cut sod for the construction of a 7.5 kilometre road network with an asphalt over-lay for Dome-Pillar 2.

For years, residents of Dome Pillar 2 have been crying for their fair share of the national cake with the area seen to be deviod of development but now their plights, regarding poor road network, is being addressed through this effort by the Hon. MP.

The road project is expected to link major roads from Haatso and Kwabenya to Dome. This comes as a huge relief to residents, commuters, motorists and the transport unions who have been incessantly calling on both the MP and the Assembly to take immediate action to address their deplorable road conditions among other developmental challenges.

In an address, Hon. Adwoa Safo, noted that the project was the first of its kind in the area which is expected to give Dome Pillar 2 a huge facelift and called on the residents to cooperate with the contractor to expedite work on the road.

"I know residents of Dome Pillar 2 have been clamouring for development projects. I and your MCE have been working hard to bring you this project which I know has come as a huge relief to you all. Every major development comes with its own challenges and some of you may be affected by the work of he contractor. Some of you may have to relocate your containers and other temporary structures to ease the work on the road. I urge all to collaborate with the contractor in this regard so that work may be expedited on the road ", she said.

“We know that the poor road network in this municipality is a major headache for our residents. As a government which listens to the cries of its people, we have already embarked on work on most of the major roads in Dome-Kwabenya. Already, work on the Atomic to Taifa-Burkina road is eighty percent (80%) completed and work on the Atomic to Kewabenya road is ongoing. Most of the major roads in Taifa have had asphalt overlays and work will soon begin on the Kwabenya-Berekuso road which would link the Greater Accra Region to the Eastern Region without having to use the congested Madina-Adenta route. We're also soon starting the Ashongman-Pure Water road which is part of the Synohydro projects as well as the Abokobi-Pantang, Abokobi-Boi, Abokobi-Ashongman and Abokobi-Teiman roads", she emphasized.

MCE, Hon. Janet Tulasi Mensah, in her part commended the Hon. Adwoa Safo and thanked her for the hard work she put in to bring this and many other projects to the municipality.

"We cannot hide our joy at this bold step our Hon. MP has taken to bring this project to Dome Pillar 2. We are blessed to have the most hard-working MP in the nation who is ready to go to all lengths to lobby for projects for the municipality. Every project we desire to bring to Ga East is accorded due diligence due to the hard work of our MP and we are most grateful that this road network would transform the area and enhance its economic potentials", she said.

MCE continued to assure residents that the Assembly, with the effort of the Hon. MP, will not rest till all roads and drains in the municipality are fixed.

"I wish to assure all and sundry that, we as an Assembly, together with our Hon. MP, will not rest until all our roads and drains challenges are fixed to bring comfort to users and residents", she added.

The road project, being constructed by MS ADT Construction Company Limited, will cost GHC16.2 Million and funded by the Government of Ghana, is expected to be completed by July, 2019.