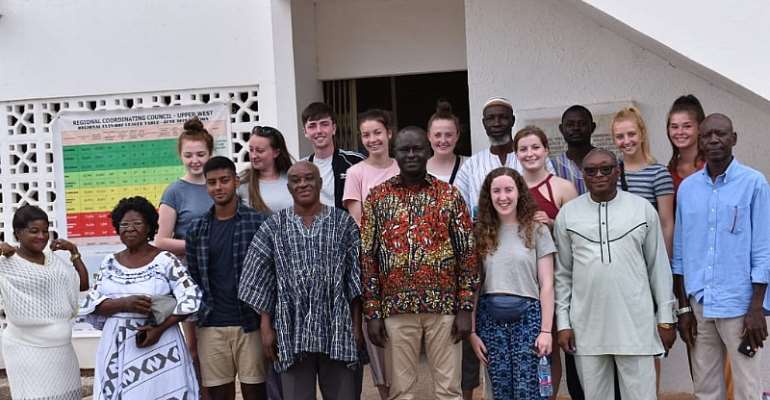 Dr Hafiz Bin Salih, the Upper West Regional Minister, on Thursday, welcomed a group of volunteers from the United Kingdom (UK) into the Upper West region to render educational services to the people of Kaleo in the Nadowli/Kaleo district.

The volunteers, numbering ten, paid a courtesy called on the Regional Minister at his office to officially announce their presence and to seek the blessings and support of the Regional Coordinating Council (RCC).

Dr Bin Salih commended the UK based Catholic charity, the Lassalians for their immense contribution to the development of education in the region and the country at large.

He assured them of the warm hospitality of the people in the region which would make their stay lovely and safe.

“There is nothing dangerous about this region. It is as safe as where you are coming from. You are not going to regret your decision for coming to provide services to our people. In fact this will be something that you are going to cherish forever in your life for deciding to leave your comfort zones to come and provides service to humanity”, he said.

The Regional Minister added that “there are certain stereotypes and people have certain opinions about Africa and I know that before you made the decision to come to Ghana and particularly to go to Kaleo you may have heard some of these negative things about the area and hope that by the end of your services, you will have positive thoughts about the people here”.

Dr Bin Salih assured the team of the RCC’s unflinching support to help meet their needs and ensure that their activities were successful.

Mr Matthew Song-Aabo, the Chairman of the Kaleo Education Committee, who led the team to the Regional Minister said the Lassalians had help improved education in the Kaleo community over the past 29 years through the provision of school infrastructure and amenities.

Among them included the water facilities, dining hall and assembly hall facilities at the Kaleo Senior High School as well as classroom blocks and teachers bungalows in other schools in the community.

Mr Song-Aabo indicated that for the past 29 years the influence of the UK based Catholic charity in the Kaleo community had been phenomenal, and said they had invested over £350,000 shelling to improve education in Kaleo.