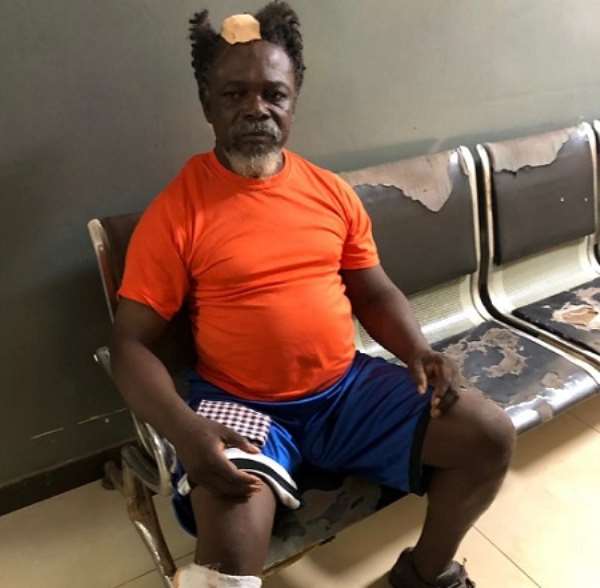 The Teshie District Police Command has caged five persons in connection to the butchering of a 58-year old man at his residence at Klanaa, a suburb of Teshie in Accra.

The man, Samuel Gaius Badu, fell victim to a group of heavily built men, numbering about 15, wielding machetes, guns, knives, bricks and other offensive weapons around 1pm on Sunday, July 7, when they stormed the Nii Kwei Tse We, a family house in the community.

He is currently receiving treatment at the Lekma Hospital in Teshie after he sustained injuries on his head, right calf and at the back of his neck.

The suspects, alleged to be land guards, are believed to have been contracted by one Kotey Surprise, a Wulomo in the community.

The said Wulomo is said to be in contention over some family properties with another sect of family members.

According to eyewitnesses, chairs had been fixed for a meeting to be held around 12pm on Sunday but a group of young men came later, disarranged the seats and hit some of them on the ground, breaking them in the process.

Family members around called the Teshie Police Station who told them they would be there shortly.

Reports say they terrorized, broke into and ransacked rooms and vandalized a lot of properties. There are claims of sums of money also disappearing following their operation.

Out of fear, the people around fled for their precious lives with some taking cover in people's rooms while others fled the compound completely.

The victim, Samuel Gaius Badu, said he was spotted by the suspects who mounted a hot chase after him.

Speaking to Daily Guide, he said, he took cover in a room belonging to an old man near the house but the suspects hit the door relentlessly in an attempt to break it open.

Some of them threw stones at him through a window, some of which hit the old man. Not wanting to bring trouble upon the old man, he fled through another window on the side of the room but some of his pursuers saw him and resumed their chase after him.

“I fell down while running for my life. They got closer and one of the guys struck my right calf with his machete. I bled profusely but I managed to get up and continued running”, he recounted.

While attempting to scale a wall in his way, one of the assailants held him by one leg and pulled him down. They then pounced on him and brandished heavy strokes of machetes, knives and the other weapons they were carrying on him as residents looked on helplessly. They left him after he felt unconscious.