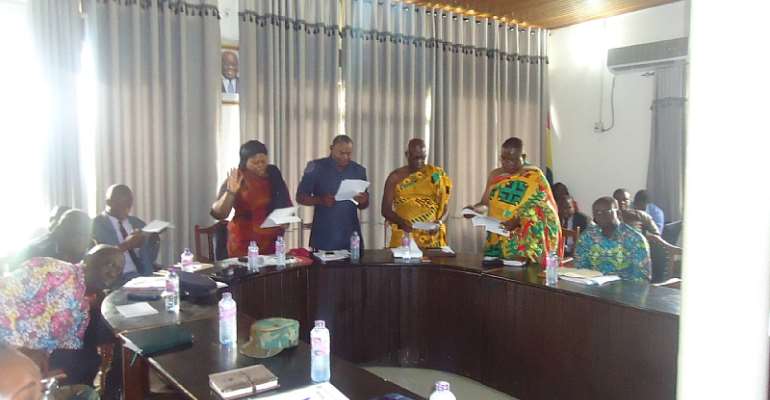 The Bono Regional Coordinating Council (BRCC) the apex body of the seat of government in the Region have been inaugurated in its first meeting held in Sunyani the Regional capital.

Consequently, in the spirit of Article 255 of the 1992 constitution and Article 186 of the Local Governance Act, 2016 (Act 936 as Amended), the Bono Regional Co-ordinating Council (BRCC) is a new entity and thus replaces the BARCC. In view of this, it has become necessary to inaugurate the BRCC to enable it perform its functions accordingly.

His Lordship, Justice Patrick Bayeeh, the supervising High Court Judge of Sunyani administered the Oath of office and secrecy to members at the swearing-in ceremony.

The membership includes the Regional Minister and the Deputy, 12 Municipal and District Chief executives, 12 Presiding members and two (2) representatives from the Regional House of Chiefs. Present to witness the inaugural ceremony were the Regional heads of Department, Institutions and agencies.

Mrs. Evelyn Ama Kumi Richardson, the Bono Regional Minister in her inaugural address, remind members of their collective responsibility to ensure the development of the Bono Region.

“I would like to urge all of us, as members to work with good conscience and in good faith at all times, devoid of our political affiliations and sentiments for the betterment of the Bono Region and its citizens. In this regards, our actions and inactions should always be focused on how to move the Region forward”, she advised.

Mrs. Evelyn Kumi Richardson who chair the Council said her vision was derived from, and tied to H.E the President’s vision for Ghana, to transform all sectors of the economy for the realization of a “Ghana beyond Aids”.

She added that her vision primarily to champion development efforts by working with the 12 districts in the Region to achieve improvement in standards of living for the people of Bono Region through the realization of their share of development in terms of infrastructure, interventions in health and education among others.

The Minister outlined Government interventions such as planting for food and jobs (PFJ), Planting for Exports and Rural Development (PERD), Free SHS, and One District One Factory (1D1F) among others to improve the lives of the people. She called on the leadership of the District Assemblies through which most of these interventions were being implemented to ensure that these programmes and projects are positively impacting on the lives of the citizens.

The Regional Minister noted that progress and development can only be attained through unity. She called on all stakeholders including security services, political parties, Chiefs, religious leaders and pressure groups to channel their energies to peace building in the Region and to be development-oriented.

“I would work to see a Region of less conflict and more unity”, She assured. She noted that it was the sure way of benefitting from the massive development of the government.

Mrs. Evelyn Kumi Richardson encouraged Council Members to have the Paramount interest of the Region and its development at heart.

“As a Council, we will be called to take decision, in accordance with the law that may have consequential effects on our Region and therefore I wish to encourage council members to always have the paramount interest of the Region and its development at heart. Let us keep abreast with the provisions of the law especially in our line of duty as council members and devotedly serve the Bono Region for the benefit of all”, she said.

The Minister use the opportunity to canvass for the support, cooperation and contribution of all council members to realize the goals and objectives of the RCC and ultimately towards the achievement of the “Ghana Beyond Aid” agenda for the people. 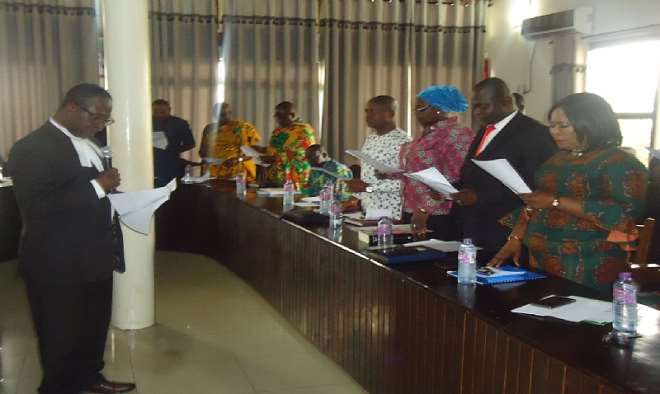