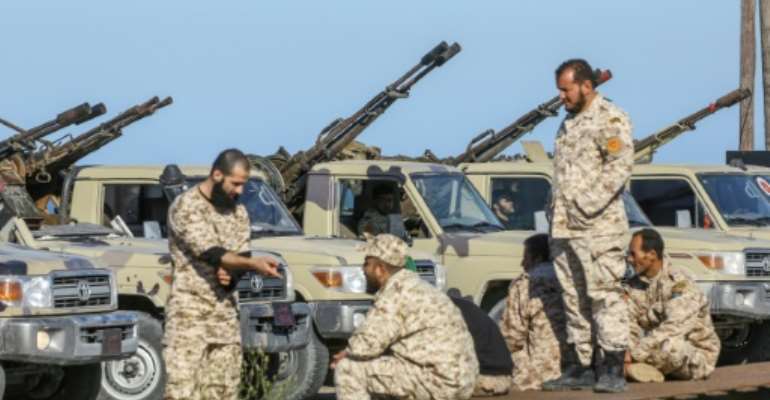 Forces loyal to Libya's UN-recognised unity government say they have arrested a number of jihadists linked to Al-Qaeda. By Mahmud TURKIA (AFP)

A Libyan militia has arrested a number of Al-Qaeda-linked jihadist leaders in a raid near the capital Tripoli, the group said.

The Misrata Joint Security Force carried out the raid against "wanted terrorists, classified as Al-Qaeda leaders", the group linked to the UN-recognised Government of National Accord's interior ministry said on Facebook late Wednesday.

The dawn operation "in a suburb of Tripoli" on Wednesday led to the arrest of individuals "linked to attacks launched in the capital", it said.

The main target, an Algerian national fighting under the name "Al-Chaoui", was rounded up along with several wanted Libyans, it added, without giving names or the total number arrested.

The force published a video of the raid, including footage of three people wearing blue uniforms with their hands bound.

It said it had also seized weapons, grenades, ammunition, documents and material used to produce explosives.

Libya has been gripped by chaos since a NATO-backed uprising toppled and killed dictator Moamer Kadhafi in 2011.

Jihadists and people-traffickers have taken advantage of the unrest to gain a foothold in the North African country.

Rival administrations and multiple militias are now vying for power, with the Tripoli-based GNA that holds Libya's west at odds with a parallel administration based in the country's east and backed by strongman Khalifa Haftar.

Haftar's self-styled Libyan National Army launched an offensive on April 4 to take the capital, but his fighters have faced stiff resistance from GNA forces, including the powerful Misrata militia.

At least 1,000 people have been killed in the battle for Tripoli, according to the World Health Organization.