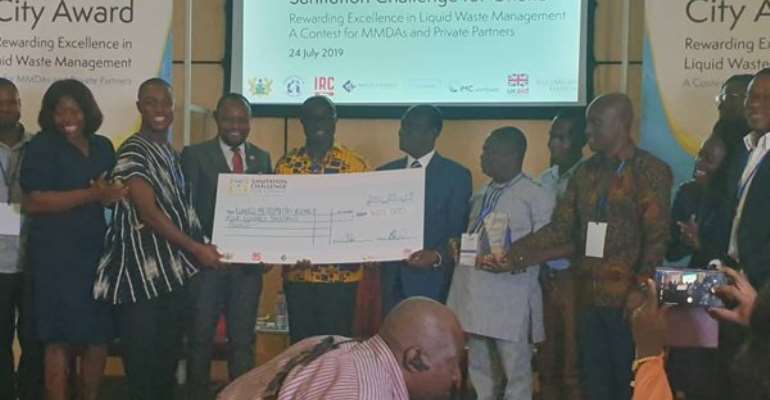 The Kumasi Metropolitan Assembly (KMA) is the Ultimate winner of the 2019 Sanitation Challenge.

The Assembly received a price of £400,000.00 to implement more Sanitation related activities.

The Sanitation Challenge for Ghana competition is UKAID funded project implemented by IMC worldwide and IRC Ghana, to create competition among all the Metropolitan, Municipal and District Assemblies (MMDAs) to design and implement innovative strategies in solving liquid waste issues in Ghana.

The project was opened to all the MMDAs in 2015 and 128 submitted their proposal. Out of the 128, 48 were shortlisted to compete in stage 2.

However, only 21 responded and applied.

This was downsized to 17 and only 15 submitted evidence of implementation of their strategies.

The 15 MMDAs were assessed and KMA emerged as the ultimate winner with a price of £400,000.00 to implement more Sanitation related activities.

It comes in the wake of the ongoing war against bad sanitation practices in the city which is a partnership between the Kumasi office of The Multimedia Group Limited and the KMA.

Two stations under the media group, Luv 99.5 FM and Nyira104.5 FM , have joined teamed up with the sanitation enforcement team recently inaugurated by the Chief Executive, Osei Assibey Antwi, to enforce the Assembly's bylaws on sanitation.