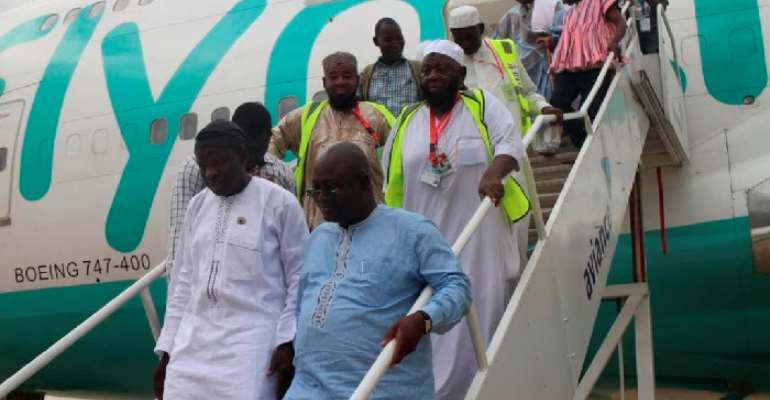 The first batch of Muslim pilgrims embarking on the 2019 hajji has been airlifted from the Tamale International Airport to Saudi Arabia.

The aircraft, Boeing 747-400 airlifted Four Hundred and Ninety-two (492) pligrims in its first trip.

The Mion Lana and other Chiefs in the Northern Region led pilgrims from the region to Saudi Arabia.

Muslim Pilgrims went through immigration checks at the Aliu Mahama Sports Stadium where the hajj village is located before being transported to the Tamale International Airport.

The Chairman of the Hajj Board, Sheikh I.C Quaye addressing journalists said government has prepared adequately for the arrival of pilgrims from Ghana.

According to him, government secured 5 star hotels for the comfort of pilgrims in Saudi Arabia.

He indicated that last year, Ghana was adjudged the best country among other black African countries that embarked on hajj in Saudi Arabia.

Mr. Quaye disclosed that arrangements have been made for Ghanaian dishes to be served to Ghanaian pilgrims throughout their stay in Saudi Arabia.

The Interior Minister, Ambrose Dery urged pilgrims to be ambassadors of Ghana and respect the laws of Saudi Arabia.

He encouraged the Northern Chiefs to sustain the current religious peace in the region.