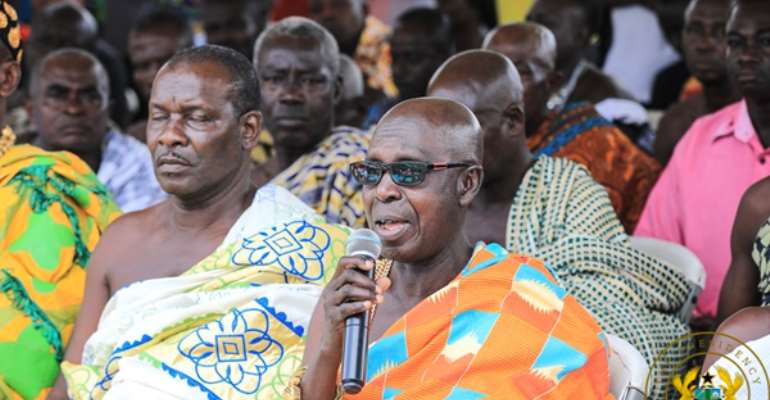 The Chief of Sekyere Hemang in the Western Region, Nana Kwedukyerefuor II has commended President Akufo-Addo for the implementation of the Free Senior High School policy.

The policy, which was implemented in September 2017, has seen some 270,000 more students enrolled in Senior High School across the country in two years.

All students in senior high schools, from September 2019, set to be covered by the policy.

In his remarks to the President, Nana Kwedukyerefuor II stated that “our children are determined to go to school. Nana (Akufo-Addo), even if you don't do anything else, please do this. This free education policy you have implemented is of great value. You have done very well, and we know that you will do your best to do all the other things we also want. ”

The Sekyere Hemang Omanhene made this known on Tuesday, 23rd July 2019, when President Akufo-Addo commenced his two-day working visit to the Western Region in the Wassa East district, where the Chiefs and people of the district held a durbar in his honour.

Nana Kwedukyerefuor II told the gathering that “ You (President Akufo-Addo) have impressed many people with your hard work. When there was dumsor, we could sleep in darkness for three days, but ever since you came into power, dumsor is no longer a problem because of your great leadership and the measures you have put in place. ”

The Chief continued, “ We humbly ask that you continue like that. There is so much that we can ask for, but we know that you are a busy man. We trust that you will deal with the few issues that we have highlighted. ”

The policy, an initiative of the Nana Akufo-Addo-led Administration introduced in 2017, had since seen more than 400, 000 students benefiting.

It forms part of efforts to boost the human resource base of the nation by giving the opportunity to the growing youth to enjoy second-cycle education, irrespective of their financial status.