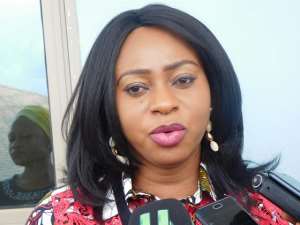 Opening the workshop which was held at the Capital View Hotel in Koforidua, the Minister in charge of Public Procurement at the Office of the President, Sarah Adwoa Safo said procurement in Ghana accounts for 70% of government expenditure which represents a chunk of the country's total GDP stressing that conflict of interest, corruption, collusion and fraud in public procurement must be reduced to the barest minimum.

According to the minister, Members of Parliament play a crucial role in ensuring corruption free public procurement regime through its oversight functions therefore there is the need to build the capacity of legislators in the area of public procurement.

She said her office in collaboration with the Public Procurement Authority (PPA) is working to compile a database of the past performance records of all contractors, suppliers, and service providers to evaluate their contractual performance abilities and financial capabilities

She added that from the data collected contractors, suppliers and service providers will be rated adding that worse performers will be blacklisted and suspended or debarred for a specified period.

The First Deputy Speaker, the minority leader and minority chief whip; Joseph Osei-Owusu, Haruna Iddrisu and Mohammed Mubarak Muntaka respectively were all unanimous by saying that when it comes to matters of public procurement, it should be on competitive basis and on merit and not on partisan basis through sole-sourcing

The First Deputy Speaker reminded government officials that the Right To Information (RTI) Act is here so those in charge of procurement should be wary that the prying eyes of the media would be on them to expose corrupt practices in procurement matters.

He also said the electorates are becoming more informed and demanding in terms of transparency and accountability so government officials could be forced through demonstrations and petitions to force public officers to disclose details of public procurement contracts.

He therefore urged public officials to protect their integrity in public procurement matters by being open and accountable.